La Roche-sur-Yon-  A French veteran made more than 10,000 euros on Friday selling four photo albums he took from Adolf Hitler's mountain retreat as "a souvenir" in the final days of World War II. 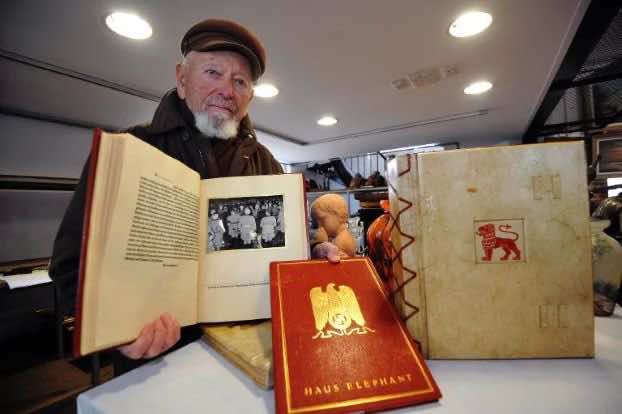 La Roche-sur-Yon-  A French veteran made more than 10,000 euros on Friday selling four photo albums he took from Adolf Hitler’s mountain retreat as “a souvenir” in the final days of World War II.

The albums, which contain pictures and messages of admiration, were presented to Hitler by supporters in the 1930s and early 1940s. Two of them are bound in red leather with the Reich eagle engraved on the cover.

The books were sold at auction in La Roche-sur-Yon in France’s western Loire region. They went to a single buyer who paid a total sum of 10,100 euros ($13,700), an AFP reporter saw.

Paul Gerbi, 92, who took the four items from Hitler’s library at his mansion, the Berghof, in Berchtesgaden in the southern state of Bavaria, said the proceeds from the sale make a nice gift for his grandchildren.

Gerbi, who fought as a sergeant in General Philippe Leclerc’s 2nd Armoured Division, said he arrived at the mountain retreat in the Bavarian Alps on May 4, 1945, four days before the end of the war and four days after Hitler’s suicide in Berlin.

“We were the first … The Americans arrived a bit later,” he said.

“For us these are great memories because to arrive at Hitler’s place at the end of the war was great after all he had done.”

Gerbi said that during the two days they spent at the Berghof they also sampled the “large number of excellent French wines” there.

“My children did not want the albums, so I thought I might get something for them. I have lots of friends who sold stuff, especially after the war,” he said.