CAIRO - Egypt's interior minister on Saturday announced the arrest of dozens of "extremists" and accused the Muslim Brotherhood of deposed president Mohamed Morsi of financing radical Islamists linked to Al-Qaeda. 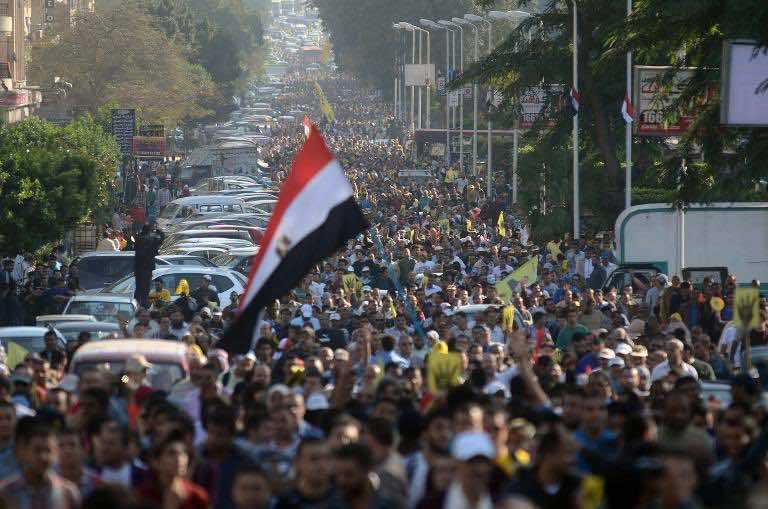 CAIRO – Egypt’s interior minister on Saturday announced the arrest of dozens of “extremists” and accused the Muslim Brotherhood of deposed president Mohamed Morsi of financing radical Islamists linked to Al-Qaeda.

Mohamed Ibrahim told reporters security forces had arrested more than 50 members of “extremist groups” with ties to the network founded by Osama bin Laden and now led by his Egyptian successor, Ayman al-Zawahiri.

The minister said the suspects were connected with attacks on police and soldiers that have multiplied and killed more than 100 people since the army deposed Morsi on July 3.

The Brotherhood “supports and massively finances from abroad numerous radical terrorists in several groups” that have since the summer “launched a series of terrorist acts seeking to sow terror”, Ibrahim said.

He said some of those held had been pardoned of offences during Morsi’s year-long rule, and that others were linked to jihadist groups Ansar Beit al-Maqdis in the Sinai and the Libya-based Ansar al-Sharia.

Ibrahim said that among them was Mohammed al-Zawahiri, brother of the Al-Qaeda chief, who was detained in August after being freed in the 2011 revolt that ousted Hosni Mubarak.

Ibrahim said some of the arrests came after a failed attempt on his own life on September 5 when a suicide bomber attacked his convoy in Cairo.

He said others were detained after an August 19 attack killed 25 police in the Sinai — the deadliest in years in the arid desert peninsula.

Yet more included men accused of the murders of several police officers, among them the November 17 killing of Lieutenant Colonel Mohamed Mabruk.

Mabruk, an officer involved in the crackdown against Islamists and the Brotherhood, was shot dead in Cairo.

Ibrahim also fired off a new warning to pro-Morsi demonstrators, who have called for a week of anti-military protests under the banner “The Massacre of the Century”.

The slogan refers to the August 14 crackdown by security forces on Morsi supporters in Cairo’s Rabaa al-Adawiya Square where at least 627 people died.

“As of now, any demonstration that is not peaceful or that blocks roads will be met with force, whatever losses are incurred by either side,” he warned.