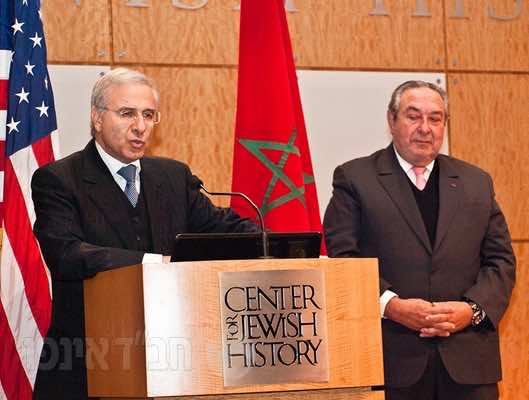 By
youssef sourgo
-
Youssef Sourgo is currently a Master’s student in Linguistic and Literary studies at Ain Chok Faculty of Letters and Humanities.
Nov 24, 2013
Spread the love

Casablanca- Morocco has always been a land of peaceful coexistence for different communities, regardless of their origins, customs, systems of beliefs, and social and cultural peculiarities. Although Islam has always been the predominant religion in the kingdom, adherents of other faiths have long coexisted peacefully with their Muslim brothers and sisters.

The mosques, churches and synagogues now standing in Morocco mark the long fraternal ties that have long bound the three faiths, and the echoes of Amdah (Islamic chanting), Hebrew and Christian chanting that continue to reverberate out of the houses of worship are evidence of the harmony the three Abrahamic religions enjoy on the same land.

This is principally thanks to the pivotal role played by the different monarchs that succeeded to the Moroccan throne in maintaining peace and coexistence between Islam, Christianity and Judaism.

Jews in Morocco, for instance, all testify to the atmosphere of fraternity and peaceful coexistence they enjoy alongside Muslims.

“Jews in Morocco are in the best situation that they can imagine,” said Serge Berdugo, secretary general of the Moroccan Jewish community and a former minister of tourism, as quoted by The Jewish Daily Forward, in an interview before King Mohammed VI’s meeting with President Obama.

An ambassador of Jews in Morocco, Berdugo describes it as the land of peaceful religious coexistence, and a nation that has long raised cement walls against religious extremism.

Mr. Berdugo’s Muslim co-citizens also share his picture of Morocco as an ideal land of religious cohabitation. “The message is: it’s possible. It’s not a fairy tale, come and see for yourself,” stated Ahmed Abbadi, a Muslim chairing King Mohammed’s council of religious scholars, as quoted by the same source.

King Mohammed VI’s visit to Washington remarkably reflects Morocco’s eligibility to be a towering model of a developing democracy in the region, thanks to the various reforms he has led over the past decade.

Currently, Morocco’s Jewish population counts 4,500 people predominantly concentrated in its economic capital, Casablanca. This Jewish community finds its roots from 2000 years ago, and was once made up of 250,000 members, many of  whom left to Israel, Europe and Canada.

Since his accession to the throne, King Mohammed VI carried on his father’s, late King Hassan II, mission to protect and ensure the prosperity of the Jewish community in Morocco.

The 15 synagogues in Casablanca commemorate the tremendous efforts preceding Moroccan rulers invested in ensuring the peaceful coexistence of the Moroccan Jews with their Muslim brothers and sisters. There also exists a Jewish school system that attracts Muslim students as well, reflecting the spirit of acceptance prevalent in the kingdom.

The particular relationship between Morocco’s Muslim rulers and Moroccan Jews was remarkably established the day the former king Mohammed V refused to import the discriminatory Vichy laws to oppress Jews in the kingdom in World War II. Since then, the relations between the monarch and the Jewish community considerably developed.

A recent case in point is when King Mohammed launched, in 2010, a program to preserve the nation’s Jewish cemeteries and financially backed the restoration of more than 12,000 Jewish graves. Today, the Jewish community in turn advises Muslim institutions on how to put into practice the program for restoring graves.

Today, a relevant and recurrent question is whether the tolerance that the Jewish community in Morocco has enjoyed for so long will stand a chance to last before the anti-Semitic plague that has sprawled neighboring countries following the Arab Spring.

For Berdugu, the answer is a loud and unshakable ‘Yes.’ According to him, the fact that the Islamist party currently leading the country continues to show great support to the Jewish community in the Kingdom is nothing less than a sign of permanent prosperity and peace for the Jews in Morocco.