BEN AROUS, Tunisia - The trial opened Monday of two Tunisian rappers and a journalist accused of insulting public officials after another musician was convicted in June, with the verdict expected later in the day. 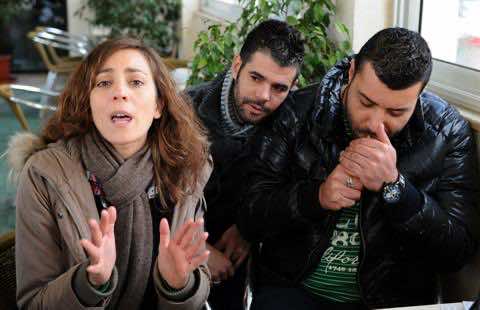 BEN AROUS, Tunisia – The trial opened Monday of two Tunisian rappers and a journalist accused of insulting public officials after another musician was convicted in June, with the verdict expected later in the day.

Aymen Feki and Moustapha Fakhfakh, as well as the French-Tunisian journalist Hind Meddeb, are charged with abusing public officials and attacks on public morals, crimes punishable by jail terms of one year and six months respectively.

The charges relate to a confrontation between police and protesters in June outside the same courthouse in a suburb of the capital where rapper Weld El 15 was jailed for insulting the police in a song.

After a 40-minute hearing on Monday, the judge announced that he would deliver his verdict later in the day, an AFP journalist reported. Defence lawyer Ghazi Mrabet said the ruling would be made public at around 1700 GMT.

“Mustapha, Aymen and I are here to give a sign of good faith. We believe we have done nothing wrong,” the journalist Meddeb told AFP.

She admitted to shouting insults when the scuffles broke out after the conviction of Weld El 15 — who was later freed on appeal when his jail term was reduced to a six-month suspended sentence.

But she insisted that the insults “were not addressed” to the police or the judiciary.

The two rappers also pleaded innocent to the charges against them.

Mrabet asked the judge to drop the charges against all three accused, stressing that Meddeb had been questioned by the police without an interpreter present, even though “she doesn’t speak Arabic.”

Since an Islamist-led government took power after Tunisia’s 2011 revolution, trials of musicians and journalists have multiplied, sparking charges from human rights groups that the authorities are stifling freedom of expression.

Weld El 15 has been on the run since August when he received a 21-month jail sentence in absentia, on separate charges of performing songs deemed insulting to the police at a concert in the eastern town of Hammamet.

He plans to appeal the verdict in court on December 5, after a fellow rapper, Klay BBJ, who was convicted on the same charges, was released on appeal in September after contesting the ruling.

Since the mass uprising that ousted former strongman Zine El Abidine Ben Ali, attempts to reform the Tunisian judiciary and the security forces have stalled.