Rabat - Footage from a forgotten school recently posted on YouTube illustrates the miserable conditions Moroccan students in rural areas have to endure to get education. 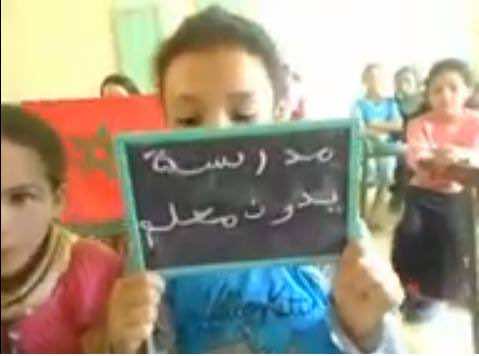 Rabat – Footage from a forgotten school recently posted on YouTube illustrates the miserable conditions Moroccan students in rural areas have to endure to get education.

The school – if we can call it so – is located in the province of Al Haouz in the region of Marrakech, and it is literally a disaster!

The video shows almost 40 little children crammed in what looks like a school classroom that lacks all the necessities that make a decent space for students to learn: No glass for the windows, no tables, no curtains, no bookshelves, and no anything.

A man on crutches stood before the camera describing the medieval schooling conditions the students, mostly from poor families, are compelled to go through.

“There is no school. We have six classrooms but only one teacher who comes in the mornings and spends one hour or two. There is no roads, the weather exacerbates the situation even more,” said the man who identified himself as a parent of one of the students.

The situation of the classrooms gets worse when it’s raining since the water is leaking from the class’s ceiling, making it difficult to learn under such conditions.