LONDON - Alex Salmond: “It will no longer be possible for governments to be elected and pursue policies against the wishes of the Scottish people.” 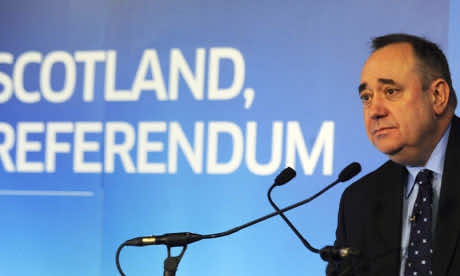 LONDON – Alex Salmond: “It will no longer be possible for governments to be elected and pursue policies against the wishes of the Scottish people.”

The Scottish National Party has published a white paper outlining a blueprint for an independent Scotland.

The document is entitled “Scotland’s future: your guide to an independent Scotland”.

20,000 copies of the white paper have been printed and it has been made available online.

The Scottish First Minister Alex Salmond and Deputy First Minister Nicola Sturgeon launched the document at the Glasgow Science Centre. The Referendum on independence will take place next September.

The white paper outlines what an independent Scotland would look like.

There have been questions over what currency an independent Scotland would use, EU membership and the UK’s nuclear Trident programmes.

Speaking at the launch, Deputy First Minister said, “Trident will be removed as soon as safely possible,” if Scotland wins its independence.

The white paper also outlines that it would abolish the controversial ‘bedroom tax’, cuts will be made to corporation tax, air passenger duty and energy bills. The paper also proposes that Scotland would keep 90% of North Sea oil which Scotland says is within its territorial waters.

Alex Salmond said that he wanted “policies that would excite and capture the imagination of the people of Scotland.”

In the document Alex Salmond says, “It will no longer be possible for governments to be elected and pursue policies against the wishes of the Scottish people.”

The document states that in an independent Scotland the BBC will be replaced with a new Scottish Broadcasting Service.

On the 18th of September 2014, four million Scottish voters will be asked “should Scotland be an independent country?”