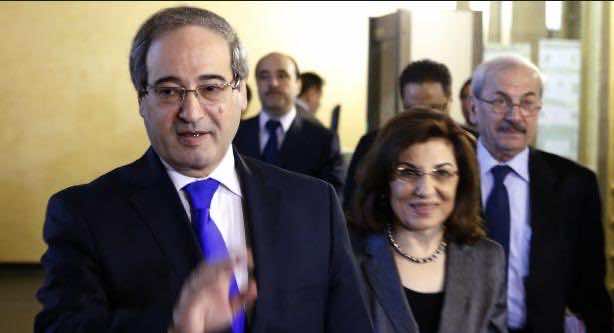 In a statement carried by Syria’s official SANA news agency, the Foreign Ministry “welcomes the announcement of UN Secretary-General Ban Ki-moon, in which he set a date for the Geneva II conference.”

The Syrian government on Wednesday said it would send an official delegation to the upcoming Geneva II conference, which aims to find a political solution to the country’s two-and-a-half-year conflict.

In a statement carried by Syria’s official SANA news agency, the Foreign Ministry “welcomes the announcement of UN Secretary-General Ban Ki-moon, in which he set a date for the Geneva II conference.”

“Syria confirms that it will take part in the conference with an official delegation representing the Syrian state and carrying [President Bashar] al-Assad’s directives and the demands of the Syrian people, topped by the elimination of terrorism,” the statement read.

The announcement comes two days after the UN chief set January 22 as the conference’s starting date.

Geneva II had initially been planned for late May, after having first been proposed at a Moscow meeting between US Secretary of State John Kerry and Russian counterpart Sergei Lavrov.

Amid heated disagreements as to who should have seats at the table, however, the event was subsequently postponed.

On Monday, UN-Arab League special envoy to Syria Lakhdar Brahimi said the list of conference participants had not yet been drawn up.

On Tuesday, Syrian opposition leader Ahmed Jarba said that his opposition coalition had not yet decided on whether or not to attend the event.

“It has conditions for joining,” Jarba said in Cairo following a meeting with Arab League chief Nabil al-Arabi.