PARIS- A French judge has got the green light from Algeria to conduct autopsies on the skulls of seven French monks who were abducted in 1996 and beheaded there, a lawyer said Thursday. 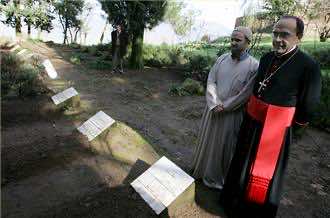 PARIS- A French judge has got the green light from Algeria to conduct autopsies on the skulls of seven French monks who were abducted in 1996 and beheaded there, a lawyer said Thursday.

Anti-terror judge Marc Trevidic however did not get permission to hear testimony from witnesses during his next visit to Algeria, said Patrick Baudoin, a lawyer for the families of the monks.

The hearings and the autopsies on the skulls of the monks are the key points of a formal request addressed in December 2011 to Algeria, seeking judicial assistance over the case.

The Trappist monks were kidnapped in March 1996 from their remote monastery. Their heads were found later but not their bodies.

Their remains are buried at the monastery.

Critics have long been suspicious of the official Algerian and French versions that the monks were killed by the Armed Islamic Group (GIA) at the height of a decade of violence that left more than 150,000 people dead.