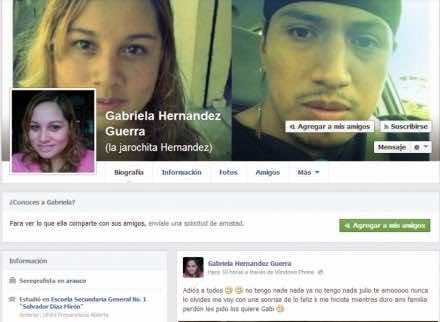 Rabat- This is a grim tragedy that is going viral on social media. A 22-year old girl committed suicide after her virtual boyfriend broke up with her.

Days before she put an end to her life, the young girl posted several pictures on her Facebook account where its appears that she suffered severe depression.

Gabriela Hernandez Guerra from Veracruz, Mexico, announced on her account the sadness caused by her breakup.

“Now you left a big void,” she said on her Facebook. “Everything ended because of my fault,” she said.

“Why did I met you, now just you left a great void. I never thought to love someone from a distance, I hope you will never regret because when that will happen I won’t be here for you. Your attitude hurts me. You were just looking for  an excuse to leave me,” she said.

The latest picture she posted before killing herself shows her with a rope around her neck.

“Good bye everybody, I have nothing, I don’t have anything. I love you Julio, don’t forget it. I go with a smile on my face for how happy I was while we were together. I ask my family to forgive” she said.

According to preliminary reports, the young girl maintained a virtual relationship with a young man from Ecuador. But because of the distance, the Ecuadorian asked her on many occasions to put an end to their relationship.