Casablanca- Italy’s Permanent representative to the NATO, Gabriele Checchia, revealed that Moroccan Intelligence provided the organization with information on Mali and predicted future developments of the situation before even Islamist extremists could occupy the northern part of the country, according to alyaoum24. 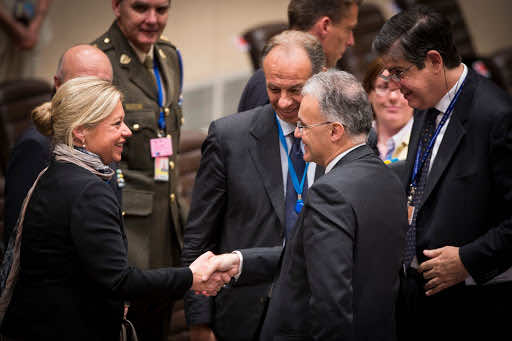 By
Jamal Saidi
-
Jamal Saidi is an English teacher.
Nov 29, 2013
Spread the love

Casablanca- Italy’s Permanent representative to the NATO, Gabriele Checchia, revealed that Moroccan Intelligence provided the organization with information on Mali and predicted future developments of the situation before even Islamist extremists could occupy the northern part of the country, according to alyaoum24.

Gabriele Checchia said during a press conference to Moroccan journalists that the kingdom had already organized a meeting in Rabat on the problems of the Sahel Region before the crisis escalated in Mali. “Moroccan intelligence provided us with reports regarding what was happening on the ground and explained further how things evolved there,” the Italian representative was quoted as saying.

He went on to say that “their predictions were accurate.”

The Italian ambassador to NATO called for more cooperation with the kingdom. He then concluded that, “sharing intelligence information with Morocco is very important.”

In reaction to the aforementioned statements, a Moroccan official told the same news outlet that the country provided the NATO with reports about the Sahel Sahara Region and warned about that the activities of terrorist networks.

The official, who spoke on the condition of anonymity, added that the NATO did not take Morocco’s concerns into consideration, believing that the country was inflating incidents because of the Sahara conflict.

However, he pointed out that the Western intelligence services realized later that the reports provided about terrorism in the Sahel Sahara region were accurate and, therefore, started to contact the country’s intelligence for more information. He went on to add that European generals came to Morocco to hear from young intelligence agents about suspect activities in the Sahel Sahara region. “They were listening and taking notes of the provided data in an attentive way,” the same official was quoted as saying.

The official listed three kinds of data that Morocco offered to NATO and Western intelligence services, but were not taken seriously:

The first is about the activities of terrorist networks in the Sahel region, which include establishing contacts with other groups in Afghanistan and other countries where Al-Qaida is present. Later, Western satellites detected the contacts established between the region and areas where there are groups affiliated with Al-Qaeda, including Afghanistan.

The second is about a suspicious relationship between extremist elements in the region and Algerian intelligence services, which infiltrated terrorist groups in order to use them for specific purposes. The crisis following the execution of foreign hostages by Islamist militants in In Aminas gas plant, guarded by nearly 1500 Algerian troops, proved the data to be accurate.

The third is about the deployment of Polisario mercenaries to support Gaddafi. Western countries did not believe this either until Libyan officials confirmed the presence of Polisario elements in the ranks of Gaddafi.