DAMASCUS  - Ten children and five women are among the casualties, as the death toll among children exceeds 12,000 since March 2011. 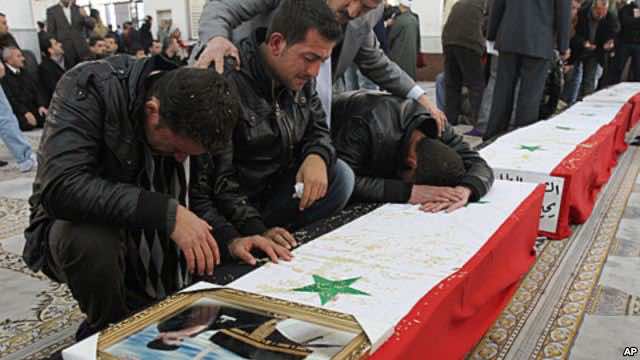 DAMASCUS  – Ten children and five women are among the casualties, as the death toll among children exceeds 12,000 since March 2011.

At least 91 people, including ten children and five women, were killed in attacks staged by the Syrian regime in several cities across the country on Friday, opposition activists said.

Syrian regime forces killed 41 in the suburbs of capital Damascus, 11 Homs, 10 in Aleppo, 9 in Idlib, 8 in Deir-ez Zor, 5 in Daraa, 3 in Hama, 2 in Quneitra, and one in each Rakka and Hasakah in air and land offensives across the country, according to a statement by the Syrian Network of Human Rights (SNHR), a London-based group which tracks civilian and dissident casualties.

On the other hand, Syrian official news agency SANA announced that Syrian regime forces gained control of the Deyr Atyya district of Damascus and killed armed groups around the district.

Meanwhile, the SNHR said the death toll among children had exceeded 12,000 since clashes broke out in Syria in March, 2011.

More than 100,000 people have been killed in almost three years of conflict in Syria and over two million Syrians are now registered as refugees in neighboring countries, Turkey, Lebanon and Iraq, according to the UN.

The Microfinance Program Director at the United Nations Relief and Works Agency (UNRWA), Alex Pollock, said that the total cost of the Syria crisis had reached $103.1 billion by the first half of 2013.