CAIRO- A court in the Egyptian city of Alexandria is to hear an appeal on December 7 from 14 Islamist women protesters sentenced to 11 years in jail, their lawyer said Saturday. 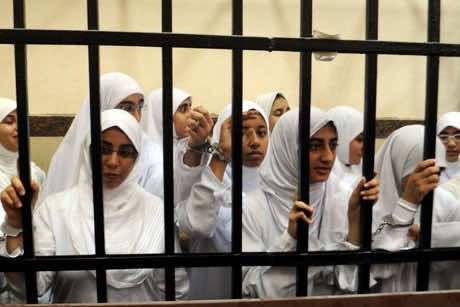 CAIRO- A court in the Egyptian city of Alexandria is to hear an appeal on December 7 from 14 Islamist women protesters sentenced to 11 years in jail, their lawyer said Saturday.

Ayman Dali told AFP that an appeal by seven other girls, all under the age of 18 and part of the same case, will also be heard that day by a separate court for juveniles.

“Their appeals have been submitted and the appeals session has been set for December 7,” Dali said.

On Wednesday, an Egyptian court in the Mediterranean city of Alexandria sentenced the women who it said were members of the Muslim Brotherhood movement to 11 years in jail.

The seven girls were sent by the court to a juvenile detention centre until they reach the age of 18.

The verdicts triggered an outcry from activists and rights groups, with some calling on Egypt’s interim president Adly Mansour to pardon them.

Dali said he was not sure what would happen to the girls after they reach the age of 18.

The prosecutor general’s office charged that the women fought with knives and threw rocks during October 31 clashes in Alexandria between supporters and opponents of ousted president Mohamed Morsi.

They were convicted of belonging to a “terrorist organisation”.  Six men, said to be Brotherhood leaders, were also tried in absentia in the same case and sentenced to 15 years.  They were found guilty of inciting the women to cut key roads in the city during the clashes.

Amnesty International severely criticised the verdicts against the female protesters.

It said the conviction and imprisonment of the” 21 female protesters, including seven girls…shows the Egyptian authorities’ determination to punish dissent”.

Egypt’s military-installed authorities have waged a deadly crackdown on Islamist supporters of Morsi since his ouster by the army in July.