BENGHAZI- The first in a series of elections across Libya were held Saturday in four towns of the south and in the restive east to replace local councils set up after the 2011 revolution. 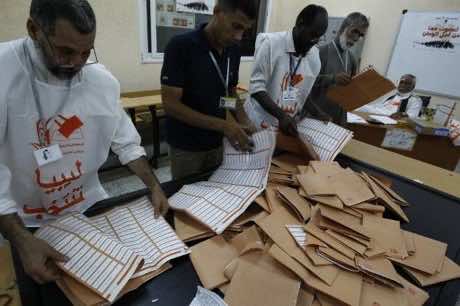 BENGHAZI- The first in a series of elections across Libya were held Saturday in four towns of the south and in the restive east to replace local councils set up after the 2011 revolution.

The voting is seen as a test for the Libyan authorities who took over after veteran dictator Moamer Kadhafi was overthrown and killed in the armed revolt.

But it comes at a time of growing political tensions and chronic insecurity that have cast doubt over the ability of the interim rulers to complete Libya’s transition to democracy.

Libya held its first vote ever after more than 40 years under Kadhafi in July 2012 to choose the General National Congress, the country’s highest political authority.

The GNC was given an 18-month mandate to steer the country towards general elections after drafting a new constitution.

The municipal elections are a step in that direction and the interim rulers have carved up the country into 102 municipalities to ensure decentralisation and strengthen local governance.

Saturday’s voting took place in Al-Baida and Shahat in the east of Libya, a region rocked by deadly violence in the aftermath of the uprising, and in Tazerbou and Bent Baya in the south.

In late October, a bomb exploded in the car of an electoral official in the eastern city of Benghazi, Libya’s second city and epicentre of the revolt against Kadhafi.

The blast caused damage but no casualties.

Mahdi al-Bahloul, a member of the central committee in charge of the municipal elections, said a seven-member council was elected for each town, with a former rebel and a woman among the team.

The new councillors are to choose mayors and then dissolve the local councils set up after the revolution.

Saturday’s vote also came after unidentified assailants gunned down a soldier outside his home and attacked a special forces base on Friday night in Benghazi, in the latest violence to hit the city.