Fez - After successfully Crossing the Gibraltar strait in July 2013 in four hours swim, Moroccan adventurer Hassan Baraka is planning another challenge and preparing to swim around the world. 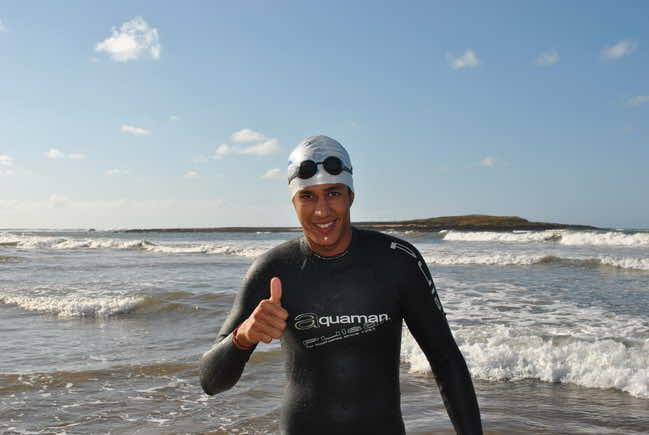 Fez – After successfully Crossing the Gibraltar strait in July 2013 in four hours swim, Moroccan adventurer Hassan Baraka is planning another challenge and preparing to swim around the world.

There is only one thing that makes a dream impossible to achieve: the fear of failure, as Paolo Coelho said.

Most people refrain from taking risks or embarking on adventures for the fear of failing or dying; which is a natural instinct to cling to life. However, Moroccan adventurer Hassan Baraka holds another opinion: adventure is life!

Hassan Baraka started his project to swim around the world by crossing the Gibraltar Strait in July, 2013 after he swam for 4 hours and crossed the distance of 16 Km.

The next challenge for Hassan, which is scheduled to take place in May 2014, will take him to Asia to swim a distance of 20 Km from Papua New Guinea to Indonesia in a sea known of its ample dangers like strong streams, marine predators and jellyfish.
In June 2014, Hassan Baraka will embark on the third challenge of his project in which he will swim from Africa to Asia by crossing the Red Sea from Egypt to Saudi Arabia. The swim is foreseen to take him no less than 6 to 7 hours in water, amidst rough waves and scary marine predators.

In July, 2014 Hassan will connect Asia and Europe by crossing the narrow strip of sea in Turkey from Kanlica to Kuruçsme. The last stage of Hassan’s project will take place in August 2014.

In his last challenge, Hassan will swim from the Big Diomede Island, Russia, to the Little Diomede Island, USA in the Bering Strait in very freezing water, which is full of orcas and whales.