New York— A train hurtled off the tracks in a New York suburb Sunday, killing at least four people, injuring 67 and coming perilously close to ploughing into a freezing river. 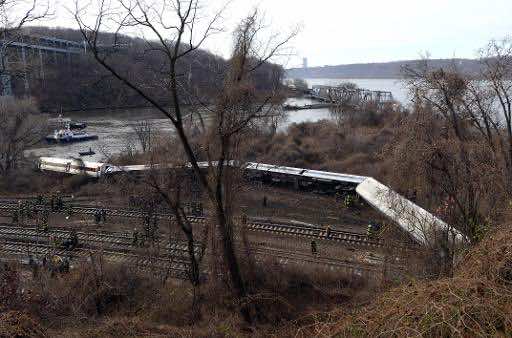 New York— A train hurtled off the tracks in a New York suburb Sunday, killing at least four people, injuring 67 and coming perilously close to ploughing into a freezing river.

New York emergency services launched a major rescue operation after the train careered off rails in the Bronx district as it headed for Grand Central station in Manhattan, with passengers giving accounts of horrific injuries.

Officials said some of the passengers were “impaled” by debris as the train derailed. Others had to be cut free from the tangle of metal and suitcases on board.

At least one passenger said the train was going faster than normal at the time the accident occurred. The train driver’s wagon came to rest only a few feet from the Hudson and Harlem rivers that join close to Spuyten Duyvil station which the train was about to enter.

All seven of the train’s cars came off the tracks. Two carriages were left completely on their side after being thrown in the air by the derailment. Two others also left the track.

More than 130 firefighters were quickly on the scene using air cushions to stabilize the wagons.

Divers searched the rivers in case passengers were hurled into the frigid water by the force of the derailment. Three of the dead were thrown from the train, police said.

Philip Banks, a top New York police official, told reporters more than 100 people were believed to be on the train which had left the town of Poughkeepsie at 6:00am (1100 GMT).

The accident happened about 80 minutes later at the end of a curved stretch of track leading into Spuyten Duyvil.

A freight train had derailed on a nearby stretch of track earlier this year.

But passenger Frank Tatulli told WABC TV that the commuter train was going “a lot faster” than normal as it went into the bend. Other travelers gave similar accounts.

The unnamed train driver survived the crash, police said, and was being treated for minor injuries. He was to be questioned by accident investigators later Sunday, they said.

Sunday marks the end of America’s Thanksgiving holiday weekend and a surge of travelers was expected.

The White House said that President Barack Obama had been briefed on the accident. New York state governor Andrew Cuomo went to the scene and he said the accident had cast a shadow over the Thanksgiving holidays.

“Families have not yet been notified, so we’ll be working on that now,” Cuomo said.

“Let’s all say a prayer and remember those people who we lost this morning and their families and we’ll let the first responders do their job.”

Train services in the region were suspended because of the derailment and the accident, which will be investigated by the National Transportation Safety Board (NTSB).