New Jersey - In my opinion Arabic is more ideal than any other language on earth because it is ancient, economical, simple, elegant and more eloquent. It was chosen to be the language of the Quran, which communicates the divine message. Unfortunately, its people betrayed it. They did not preserve the unity and uniqueness of it. As a result, we have different Arabic languages. 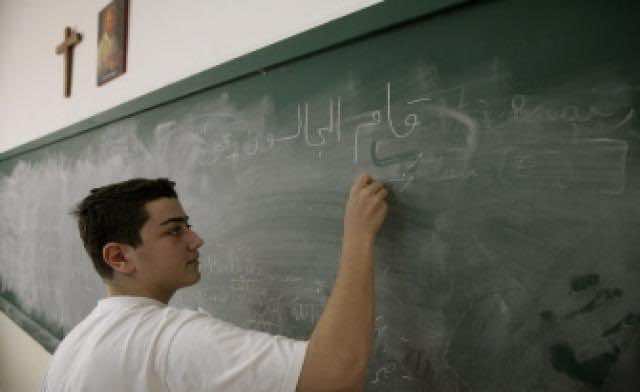 New Jersey – In my opinion Arabic is more ideal than any other language on earth because it is ancient, economical, simple, elegant and more eloquent. It was chosen to be the language of the Quran, which communicates the divine message. Unfortunately, its people betrayed it. They did not preserve the unity and uniqueness of it. As a result, we have different Arabic languages.

Arab countries should have kept the original language as one for all. Now, as a Moroccan living abroad, I find myself in the dilemma, a situation in which a choice must be made between speaking with my children in the original Arabic [Modern Standard Arabic] or the Moroccan language [colloquial], which has so many different words. It is confusing to my child when I use the word “aji” in Moroccan Arabic meaning “come” and then when reading a text in an Arabic book the word “come” is “Ta3ala.” It is disappointing and frustrating to not be able to teach my children the right original language. But it is more frustrating to teach them Moroccan language which uses words from French and sometimes other languages. I want to come out of this dilemma by choosing to teach them Arabic language as I know it, although I know I do not know it right. But, I really do not have any other choice.

It would seem redundant to write on such an issue, but I feel compelled to do so for two reasons:

First, I just came out of a wrong assumption I used to have and I believe that so many Arabs still have. Like any bilingual newcomer, I thought that my children should first learn to speak “well” in English. I was afraid that speaking Arabic to them would hurt them socially or academically. I also thought that Arabic would confuse them and make them fall behind their peers in school. Now I realize that all these assumptions were wrong. My children need to grow up adequately speaking Arabic so that their tongue and brain can adjust to producing its phonics, syntax and semantics.

Second, I run into so many of those families who really gave up thinking about it and the result is obvious: the passing down of the Arabic language is diminishing more and more. Nowadays, most Arab Americans do not know Arabic, of course, as many are second-, third- and fourth-generation Americans. According to the latest estimation, there are nearly 3.5 million Arab Americans in the United States. Though scattered all over 50 States, most of them reside in the metropolitan areas of major cities. Those communities were driven away from their native language and culture, by the local circumstances, the over presence and strength of a foreign tongue and culture, and the lack of resources and materials for Arabic language teaching and learning.

By far the most common challenge encountered by all Arab families who immigrated to the United States of America, and intend to permanently live in it, is mainly to get their children to learn the Modern Standard Arabic [MSA]. Even though there are so many colloquial varieties of Arabic in different places throughout the Arab World, Modern Standard Arabic is the variety learned largely through formal education, and used primarily for written [books, newspapers…] and formal spoken situations [news, conferences…]. All the other varieties mainly used in everyday conversation [shopping, chatting…] are regarded by Arab Americans as degraded forms of the language. However, most of them choose to continue to speak their Arabic dialect at home in an attempt to make their children automatically understand the language. Though, it has proven to be of no big use, since those children grow up exclusively with the English language which causes communication problems within families.

Yet, many families all over the world share the same concern. Everybody is now more or less aware of the importance of the native language (and cultural education). Spanish, Japanese, Indians, Albanians, and so many other minorities in the United States tend to hang on to their native languages and cultural baggage. So many of these minorities are supported financially by their countries of origin in maintaining private schools and providing programs, resources and material. The most important objective is to establish an excellent connection with the education in their country of origin, to make the return to the schools in those countries smoothly, especially for those who choose to do so in the future.

Families from the Arab World do not have that kind of support from their countries of origin. They find themselves facing the problem financially and emotionally. Most of the Islamic Centers are established by the Islamic Local Communities as independent organizations. Their function is to practice and propagate Islam in the United States of America by providing religious, educational and recreational facilities for members of the public at large. The majority of Arab Americans are Christians who would not attend these centers though they offer Arabic language learning in their programs.

Yet, those Centers have become a destination for so many families who are convinced that the sooner the children come into contact with bilingualism the better. They offer weekend School for boys and girls between the age of 4 and 14, who may join the programs either on Saturday or Sunday from 9:30 am to 2:00 pm. The Centers teach the Quran, Islamic Studies and Arabic Language. They start on the 2nd weekend of September and end on the 2nd weekend of June each school year. Fees are currently $60 for the first child, $55 for the second, $50 for the third. Maximum per family is $200 a month, including books. Those Centers usually run summer schools that start the first Monday after the 4th of July and last for six weeks. The programs include teaching Quran, Islamic Studies, Arabic Language, Arts and Crafts and other life skills. Thursday is usually a fun day where students either go on a field trip or do some activities in the playground or the adjacent public park. Fees are $200 for the first child, $180 for the second, and $160 for the third. Maximum per family is $600 regardless of the number of children for the entire session. So, the cost of such Centers is obviously high and many families cannot afford them.

There are also a handful of private schools, offering Elementary, Middle and High School. They have developed a comprehensive education program taught to the highest standards as defined by States’ Core Curriculum Content Standards, with a strong focus on Islamic Studies, Qur’an, and Arabic Language. These schools charge more than $6,000 per year in tuition. Therefore, they are really expensive for most of Arab American families who may have more than one school-aged child.

Therefore, this language deprivation leads to the feeling of “uprooting.” Parents and children no longer speak the same language and the social and emotional impacts are far reaching. Those children not only lack means of communication, but involvement or identification with the family members in the country of origin. If they afterwards choose to return to their country, there will be no connection at all. With all this in mind, there is a growing awareness of the need for “bilingualism.”

While the resources and materials are practically non-existent and the texts from Arab countries are not always suitable for the American environment, many Arab Americans resort to their own culturally appropriate teaching materials to suit the particular needs of their children. It all starts at home, from everyday conversation and family routines, during family outings and celebrations, where Arabic is spoken as much as possible. Children speak English at school all day and when at home, they have homework to do in English, then some TV to watch as well in English. So, they need to hear quantity and quality language input during the rest of the day to have strong language skills.

For consistency’s sake, we can become better language users, learners or teachers if we develop a better understanding of our language. If we are conscious of how to appropriately use our words, we can fix our degraded Arabic dialect “Darija,” and give our children a better language. We should be sure of the language we are speaking to our children, while not just communicating, but aware of what we are saying, using formal words for simple everyday conversation, like “ktir” instead of “bzaf” to mean “too much,” “na3am” instead of “wakha” to mean “yes,” “kfaya” instead of “safi” to mean “enough”…, and the list goes on. This is the appropriate way we can cover the gap between our varieties of Arabic languages. Our children will switch more “easily” from their first language “Darija” to “Modern Standard Arabic,” as the language of their culture, then to “English,” as their community language.

Let our children be “Bilingual”

In other words, let us expose them to quantity and quality Arabic and English languages simultaneously from a very young age. Studies have proven that each language has the ability to shape their perception of the world, their problem solving abilities, their mental flexibility, their attentional control, and their task switching. Let’s make them smarter kids by fostering enough motivations and all the opportunity in our choices in relation to daily life, schooling, recreation, and so on.

In practice, let’s be mindful to motivate and give opportunity to our children by speaking almost exclusively in Arabic at home and out in the community (even when they respond in English), by playing groups and outings with other Arabic families in the area, by giving the kids a taste of Arabic culture as much as possible like in food, music, dressing…, recognizing the flag colors, saying some prayers in Arabic before bedtime, even performing some prayers altogether, by keeping in contact with other Arabic-speaking family members who live far away via Skype or other [my children love these interaction times which are in Arabic], by making books and children’s shows or movies in Arabic, and limiting English video time, and at last but not least, by teaching them to read and write in Arabic, which is a long process that needs too much time and patience.