CAIRO- The text of a new constitution that would consolidate the power of the army was handed over to Egypt's interim president Tuesday giving him a month to call a referendum. 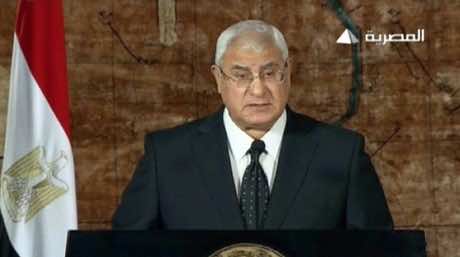 CAIRO- The text of a new constitution that would consolidate the power of the army was handed over to Egypt’s interim president Tuesday giving him a month to call a referendum.

The text was given to president Adly Mansour by former Arab League chief Amr Mussa, who headed the 50-member drafting committee which completed its work on Sunday.

Speaking at a news conference after the handover, Mussa called on “all Egyptians to take part in the referendum and to vote ‘yes’.”

“Egypt faces dangerous acts of sedition that we must bring to an end,” he said.

The vote on the draft charter has been billed as the first stage in a “democratic transition” promised by the military-installed authorities following the ouster of Islamist president Mohamed Morsi in July.

The text would allow the military to prosecute civilians in some cases, appoint the defence minister and keep its budget beyond any civilian scrutiny — powers held by the legislature, executive and judiciary of most democracies.

The most controversial article states that “no civilian can be tried by military judges, except for crimes of direct attacks on armed forces, military installations and military personnel.”

Secular activists and rights groups have severely criticised the provision, fearing it could be applied to protesters, journalists and dissidents.