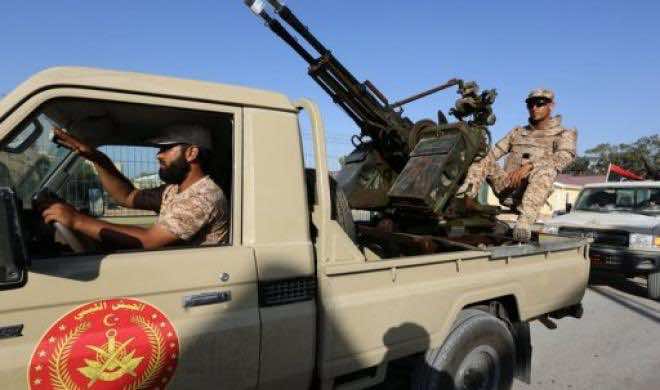 The killings are the latest in a spate of attacks in Benghazi on members of the military and the police force, as the North African nation struggles against insecurity.

Medics at the Al-Jala hospital named the murdered soldiers as Ahmed Hamdi, 23, and Salah al-Werfelli, 28, adding that both men had been shot in the head.

Further east, in the Islamist bastion of Derna, residents on Thursday staged new demonstrations against what they say is anarchy in the city and to demand a police and army presence.

On Monday, unknown gunmen fired on protesters in Derna, leaving one person dead and seven hurt, according to an updated toll given by a medic on Thursday.

Like Benghazi, Derna has in recent months seen a wave of killings of members of the security forces and the judiciary.

The violence is blamed on jihadist groups that have mushroomed since the toppling and killing in 2011 of long-time dictator Moamer Kadhafi.

Chief among these is Ansar al-Sharia, a jihadist group blamed for a 2012 attack on the US consulate in Benghazi in which the ambassador and three other Americans were killed.

The group implicitly denied responsibility for Monday’s attack on protesters in Derna.

“Opening fire with live rounds on protesters … is a dangerous thing,” the group said in a statement received on Thursday by AFP.

Prime Minister Ali Zeidan announced on Wednesday that preparations were under way to send troops to Derna, where law and order is almost non-existent.

The country’s new authorities have tried in vain to integrate former rebels who helped topple Kadhafi into the regular armed forces, with many militias carving their own fiefdoms, each with its own ideology and regional allegiances.