Israel’s security is a top priority in talks with Iran on its controversial nuclear program, U.S. Secretary of State John Kerry said during his Jerusalem visit Thursday. 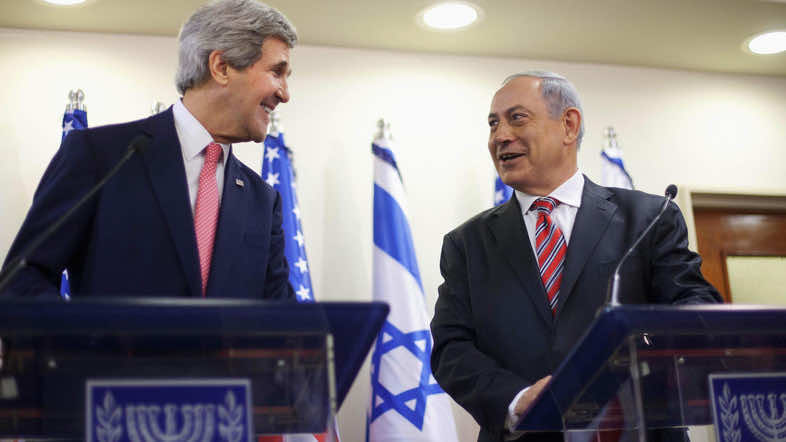 Israel’s security is a top priority in talks with Iran on its controversial nuclear program, U.S. Secretary of State John Kerry said during his Jerusalem visit Thursday.

“I can’t emphasize enough that Israel’s security in this negotiation is at the top of our agenda,” Agence France-Presse quoted Kerry as telling reporters after a meeting with Prime Minister Benjamin Netanyahu.

He added: “And the United States will do everything in our power to make certain that Iran’s nuclear program of weaponization possibilities is terminated.”

When meeting with Netanyahu, Kerry assured him that the core sanctions against Iran would remain in place despite its interim nuclear deal with world powers.

The sanctions were eased after the deal struck in Geneva last month, to which
Israel strongly objected.

“The fundamental sanctions regime of oil and banking remains absolutely in place. It is not changed. And we will be stepping up our effort of enforcement through the Treasury Department and through the appropriate agencies of the United States,” Reuters quoted Kerry as saying.

Speaking earlier, Netanyahu told Kerry “steps must be taken to prevent a further erosion of sanctions.”

Kerry’s remarks were aimed at calming tensions with Israel over the interim deal reached in Geneva on November 24, which saw Iran agree to roll back parts of its nuclear program in return for limited relief from Western sanctions.

The deal was roundly condemned by Netanyahu, who called it a “historic mistake.”

Kerry landed in Israel late on Wednesday for a trip aimed at giving momentum to Israeli-Palestinian peace talks, which have made little apparent headway since they began under his patronage in late July.