Morocco World News
Home Highlights on Morocco Morocco: Tens of B.A. and M.A. teachers beaten and injured during their...

Sidi Ifni- Tens of teachers have been taunted, beaten and severely injured by the Moroccan forces in Rabat today for taking to the street, to ask for what they called their "basic right," which is getting promoted with their B.A. and M.A. 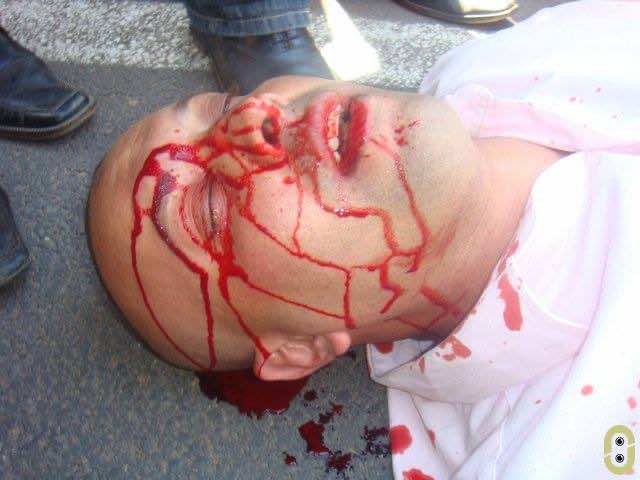 Sidi Ifni- Tens of teachers have been taunted, beaten and severely injured by the Moroccan forces in Rabat today for taking to the street, to ask for what they called their “basic right,” which is getting promoted with their B.A. and M.A.

The protesting teachers marched along Rabat’s main streets to speak out against “the irresponsibility and apathy of the Ministry of Education” in dealing with their legitimate file of demands.

More than six thousands teachers have taken part in several forms of protesting, ranging from sit-ins to weekly strikes, for three weeks now.

The authorities interfered with the protesting teachers’ march in front of the main office of the human resources department near Irfan in Rabat and injured and beat tens of them.

Many videos attest to the unconstraint violence used by Moroccan security forces towards the peaceful protesting teachers.

Unions of teachers, along with the Ministry of education, have turned a deaf ear and a blind eye to teachers’ demands.

“All that we are calling for is getting promoted with our well-earned diplomas, B.A. and M.A.,” he added.

It is worth noting that 2008, 2009, 2010, 2011 intakes of protesting teachers managed to procure this right of promotion to a higher scale after much militancy, numerous strikes, much sacrifice, and sit-in in Rabat.

These intakes succeeded in their adventure after shedding some blood and experiencing severe beatings.

The intakes of 2012 and 2013, whose calls for promotion have remained so far neglected and unanswered, “took an oath to stay in Rabat until they procure their well-deserved right,” according to a circular posted in their Facebook page.

“Is this the way we treat teachers in the so-called most beautiful country of the world? Today, tens of teachers have been severely beaten. Teachers have shed blood. They are bleeding! Look at the pictures! Watch the videos. This is a massacre! It’s incredible,” Saida Malki, a teacher of French, told MWN.

“It is heart-rending. It’s pitying. This is a calamity. This is dangerous. We have been beaten and surrounded by police from all sides. We are peacefully protesting against stifling our right. We teachers are repressed,” she added.

This is the second time police forces have interfered to disperse the march of the protesting teachers, beat them, and consequently leading to many injuries.

“I have received many blows on my head. My colleagues too have received painful blows on many parts of their body,” Adil Mohmadi, a teacher of Islamic studies, told MWN.

“ This bloodshed is a sign that teachers have no slightest value in this country,” he added.

So many injured teachers have been taken to hospital, while others continue to protest against what they called “callous” attack.

Photo Credit: The Official page of the national coordination of B.A. teachers excluded from promotion