Fez - Since ancient times teachers have been honored and distinguished for the responsibility they bear towards the future generations in their societies. 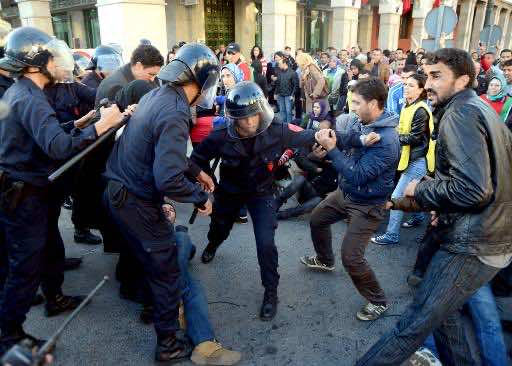 Fez – Since ancient times teachers have been honored and distinguished for the responsibility they bear towards the future generations in their societies.

“Those who educate children well are more to be honored than they who produce them; for these only gave them life, those (teachers) the art of living well;” thus spoke the Greek philosopher Aristotle.

In countries where education matters, teachers cherish full rights and privileges and give back the best to their students. In one of his speeches, the US president Barack Obama hailed the role of teachers and said: “Teachers matter. So instead of bashing them, or defending the status quo, let’s offer schools a deal. Give them the resources to keep good teachers on the job, and reward the best ones.”
In Morocco, however, the case is different. We are used to the scenes of teachers being beaten by security forces in Rabat in broad daylight and before the lenses of national and international cameras.  Why? It’s because they protest for one or several of their rights and the rights of their students to have proper education. Unfortunately, the scenes we get from Rabat contradict all the official discourses on educational reform. Is there really a will to fix the most vital sector that goes limply? Personally, I’m not convinced despite the noisy official media showiness about education reform. The practices on the ground in Rabat undermine all the claims.
Beating teachers unscrupulously – some of them bleed, other faint, many get wounded, etc- is an act that speaks volumes of the cruelty of those who gave the order of using violence to security agents. As a teacher, I get increasingly disappointed and frustrated when I see my fellow teachers, who gave the flower of their youth in universities, being treated in such a brutal way. Do those teachers obstruct traffic and delay people’s interests? No, they don’t. They protest in the most civilized and organized way ever. The use of violence, thus, seems ungrounded, unless it were to terrorize teachers and force them to go back home empty-handed!
Unknowingly, many people hold teachers responsible for the failures of Morocco’s education. They criticize teachers for some negative practices that appear sporadically hither and thither because such practices tarnish the image of teachers and do it much damage. However, because of blatant generalizations, the reputation of teachers has been spoiled by a number of clichés, stereotypes and even jokes and scorn.
Certainly, these people don’t know about the true reasons of Morocco’s educational fiascos. They don’t know about the pervasive corruption in delegations and academies. They don’t know about the flagrant corruption in trade unions, which are mushrooming to no avail. They don’t know about the millions spent in vain. They don’t know about the unpredictable and whimsical decisions and notes teachers have to abide by willy-nilly every now and then. They don’t know about the deep-rooted bureaucracy in our administrations. They don’t know about the bossy behaviors of many of our ‘Stone Age’ officials. They don’t know. They don’t know. They don’t know!
Beating teachers in public would add insult to injury. How would teachers face their students after they rejoin their classes, given that their pictures fainting, wounded or bleeding circulate on Facebook from student to another? How would they inspire their students with values of citizenship, leadership, engagement and commitment while the broken arm, the bruised eye or the injured leg still hurts? How would they motivate their students for better achievements while they need motivation themselves after their humiliation in Rabat?
As a teacher, I chose this job after a long love story. It was a teacher who first taught me how to hold a pen. It was a teacher who first opened my eyes to the world and made me realize that the earth was never flat! It was a teacher who first implanted respect, tolerance, love, diligence and other good values in me. It was a teacher who first believed in me and showed me the right way. I developed a great passion for the job thanks to all the inspiring teachers I had (and I still have).

I oftentimes lied to my family and pretended to have applied to other jobs but actually I never did because I never imagined myself doing another job. As lover of this job, I believe the reality of education in Morocco would not improve without the recognition of teachers. The teachers who are beaten in Rabat – many of them are poets, writers, painters etc- have sacrificed a lot of their time, personal comfort and money in their quest for knowledge. Don’t they deserve reward for the efforts they made to obtain their MAs and BA to eventually benefit their students and their country?