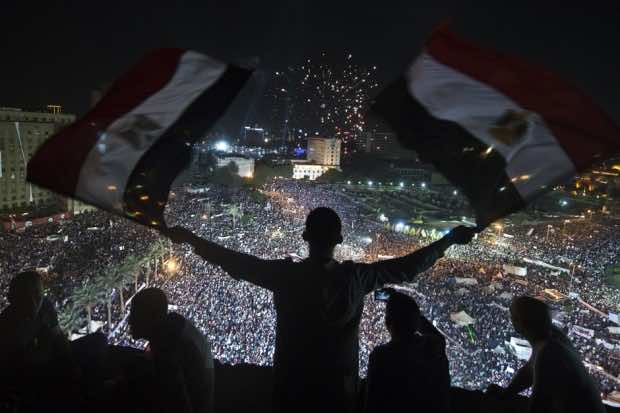 In depth, The Animal Farm; one of the greatest works of allegory and dystopia in literature, was published in 1945 by the English novelist and journalist George orwell to reflect on the Russian Revolution of 1917 and to question the totalitarian and authoritarian nature of the Soviet Union regime. Both in its story and plot, this work of art has today more relevance to Egypt and the current struggle of the Egyptian people for democracy and reflects an image of a devastated land, a lost identity and an overthrown coin in the fresh air of a military coup.

Before delving into the details of this literary approach to the reality of today’s Egypt, it was necessary to raise the reader’s attention into two central considerations:

First: In today’s world, which increasingly and aggressively connects to a high volume of virtuality, we may be blamed for our involvement and concern with Egypt and its long struggle for democracy. To those who may associate our concern with curiosity I say: Either, directly or indirectly, Egypt and throughout our modern history, has always benefited from a valuable presence in our shared memories and has been privileged for its strong historical influence. Either, culturally or politically, Egypt, along with palestine, has long been involved in the Arab world and has always played a central role in its geopolitics. With this choice, our heritage was mainly Egyptian-orientated, our identity was Egyptian-influenced and our art was merely a reflection of its image both in the past and in our contemporary history. With this choice, our concern is well justified and supported and our brothers and sisters in this prestigious land should openly welcome us to their collapsing world.

Now, we may wonder! What can be the second point? Here, I say: it is more complicated, more sensitive and related primarily to the tensity of hypocrisy and contempt expressed and reflected in many of our friends in Egypt. Be it in media outlets, streets or in the dark corners of military offices, the same propaganda is supported to introduce the Egyptian people a disfigured reality and drive them into a more chaotic and conflictive path. Be it by politicians or by intellectuals, the same bias discourses and speeches are being delivered to largely ignorant people to convince them with a brighter future that is now being built on human remains and blood in all corners of Egypt.

Today, a man raises from the gloomy rooms of Egypt’s military intelligence and sees no determinations or limitations to his power. A power that has long been linking itself to values of honor and virtue and trying to keep its traditional influence. A power that was unfortunately built into our memories to resemble moments of failure and deception. A power that we can all see how it executes its tyranny on its own people and leaves us with deeply wounded hearts.

In modern history, various wars were fought by the Egyptian army with no significant gains or achievements. In 1948, the last king of Pharaohs, Farouk I of Egypt fought the first Arab-Israeli war and lead the Arab armies to a horrible defeat. In this war, Israel kept the lands recommended by the United Nations’ General Assembly Resolution of 1948 and gained control of almost more than 60% of the areas and lands allocated to Palestinians. The war of 1967 was a setback and a deep wound in the memory while the one of October,1973, which actually came as a shameful response to calm a growing anger in the streets, was merely a theatrical scene of an Egyptian army passing the Suez Canal across its banks.

Inspired by the events in Tunisia and its spring, on the 25th of January, 2011, revolutionary waves of long oppressed people reached most of Egypt’s squares protesting Mubarak’s regime and chanting for liberation. Some courageously took initiatives and put themselves in a high risk of prosecution to shine the lights of glory for their fellow Egyptians and draw them a new path of hope and love. Others, chose to either oppose that uprising protest or, in some scenarios, to just wait and see what the coming days may reveal.

An absolute bureaucracy, human rights violations, political corruption, the concentration of wealth, extreme poverty, unemployment and economic decline have caused so much damage to the country’s socioeconomic structures and created a growing dissatisfaction, leaving people one single choice: to rebel.

Time passed and Egyptian people gradually overpassed the barriers of fear to finally succeed in flipping their overthrown coin of Mubarak. Unfortunately, the new rulers of Egypt; the Muslim Brotherhood, failed and with their failure new protests and manifestations headed paradoxically to the same squares and chanted the same songs of freedom. With significant and obvious support and back up from the military, those who first chose silence are heavily holding on the podiums of today and their voices are much louder than the shots heard from their protecting tanks. It is simply a world of complete confusion. A world of an animal farm.