Arab and Muslim figures on Friday mourned the death of former South African President Nelson Mandela, noting his cause as an example for the world to follow. 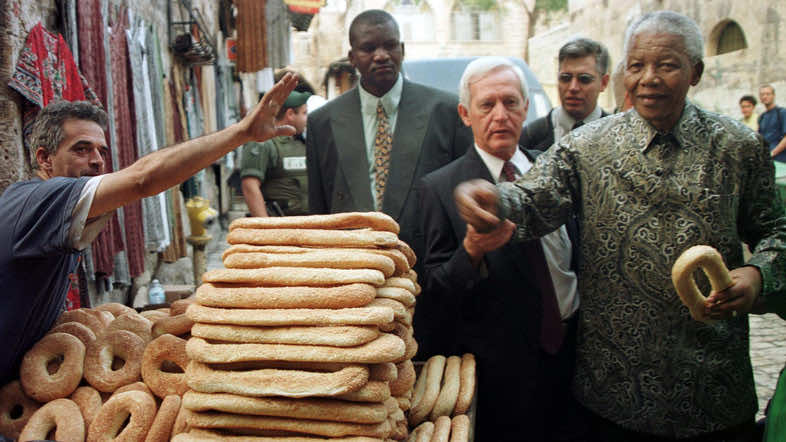 Arab and Muslim figures on Friday mourned the death of former South African President Nelson Mandela, noting his cause as an example for the world to follow.

Egypt’s presidency released an official obituary statement, reflecting on Mandela’s fight for justice and the struggle to end apartheid.

“Egypt had a leading role in supporting the resistance of African countries to reach their freedom and independence. Because of its hard stance against racial discrimination in South Africa, Egypt did not hesitate to cut diplomatic relations with South Africa’s former racist government.” al-Masry al-Youm website quoted the statement as saying.

“Leaders like Nelson Mandela, Gamal Abdul Nasser, and the African forefathers who struggled for freedom and independence will forever be a source of inspiration to people, and an example to lead by.

“He will remain in the hearts and mind of Egyptians as one of the most prominent symbols of national struggle in the modern world,” added the statement.

Ahmad al-Muslimani, presidential advisor to Adly Mansour, publicly commented on Mandela’s death, saying that Egypt and the African continent will always remember him as a lieutenant of pride and glory, reported al-Fagr news website.

Cairo feels deep sorrow for the departure of an iconic figure of national freedom and independence, and his cause will always inspire those seeking justice, said the Egyptian official.

Iran’s president Hassan Rouhani tweeted: “With a heavy heart, we say goodbye to Nelson Mandela. Surely, his legacy will remain a source of #inspiration and courage for all people.”

“The world has lost Nelson Mandela a great leader and symbol of struggle. May God bless his soul in peace,” Malik tweeted.

“The Palestinian people will never forget his historic statement that the South African revolution will not have achieved its goals as long as the Palestinians are not free,” Palestinian President Mahmoud Abbas was quoted by AFP as saying.

Influential Palestinian Islamist group Hamas called Mandela “one of the biggest supporters of our cause,” according to Reuters.

“Today a great freedom fighter, Nelson Mandela has died, one of the world’s most important symbols of freedom,” Moussa Abu Marzouk, a senior Hamas official, was quoted by Reuters as saying.

“Throughout his life, Nelson Mandela served as an example of strength in adversity to all those fighting for freedom and justice. His legacy of uncompromising perseverance in the face of bigotry and injustice will live on for generations to come,” said CAIR National Executive Director Nihad Awad in the statement.

CAIR‘s statement on the occasion quoted a saying by the Prophet Mohammad: “For every day on which the sun rises, there is a [reward] for the one who establishes justice among people.”

The pro-Muslim group, founded in 2007, also released a statement reacting to the death of the popular leader.

“The greatest gift one can give to a human being is freedom and that is what Mandela did for all South Africans,” The Independent Online quoted al-Jama’ah party leader Ganief Hendricks as saying in the statement.

“The party has asked all Muslims to observe all protocols as Muslim leaders from every Arab and Muslim country visit South Africa over the next two weeks to pay their respects to the country and comfort South Africans,” he added.

According to Hendricks, the party will be paying tribute to Mandela by feeding the poor and participating in goodwill programs over the next two weeks, reported the news website.