ANKARA- United Nations (UN) statistics show that approximately 400,000 people have been internally displaced from northern to the central and southern regions of the Central African Republic (CAR) due to violence since the ouster of the country president in March this year. 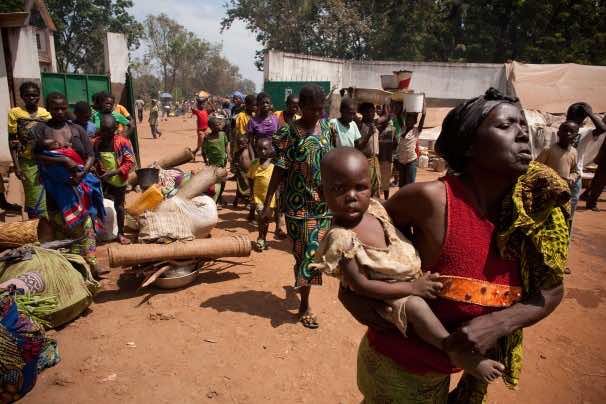 ANKARA- United Nations (UN) statistics show that approximately 400,000 people have been internally displaced from northern to the central and southern regions of the Central African Republic (CAR) due to violence since the ouster of the country president in March this year.

One million people in those regions are facing starvation as 1.6 million out of the 4.6 million total population are in need of urgent humanitarian aid. Sixty per cent of health structures have been looted or destroyed since December 2012; 80 per cent of health workers fled and took refuge in capital Bangui, and 90 per cent of medical facilities have run out of stocks.

The country has been in the throes of political turbulence since its independence from France in 1960 and it is one of the least-developed nations in the world. It has endured several coups and brutal regimes. The ongoing clashes began when ousted President Francois Bozize failed to live up to his words of sharing power after his re-election in 2011.

A rebel alliance called Seleka launched riots and took control of key towns in the north and central regions. Looting and attacks became widespread across the country as state buildings, ministries and schools were robbed and destroyed. In January, a peace agreement was signed between the warring parties. Known as the Libreville Agreements, it called for the establishment of a National Transitional Council that would elect a caretaker government.

However, the agreement failed and President Bozize was ousted by Seleka rebels in a coup d’état in March. Rebels took control of capital Bangui and the country’s transitional leader Michel Djotodia, who led Seleka to overthrow Bozize, was elected as president. State security forces then disbanded and the constitution and national assembly were suspended. Many international agencies also withdrew their staff to the capital by August due to the insecurity across the north, leaving the population even more vulnerable.

Clashes recently extended to other parts of the country including Bouar in the west towards Cameroon and to the east of the capital in Damara. By September, more than 30,000 people had sought refuge in the northwestern town of Bossangoa. Reports of numerous attacks on villages by different armed groups and targeted killings of civilians flowed from the country.

Upon the recent civilian conflicts and human rights violations in the Central African Republic, the UN Security Council gave authority of restoring order to the African Union (MISCA) mission, which is composed of 2,500 troops already deployed in the country within scope of the Resolution 2127, put into effect to protect civilians.

The resolution, which was submitted to the Security Council by France and adopted unanimously, approved the increase in the number of troops in MISCA to 3,500 while permitting France to give military support to MISCA temporarily. Alongside a French contribution of 1,000 troops to the mission, the resolution also confirmed the implementation of an arms embargo on the Central African Rebuplic, valid for a year.