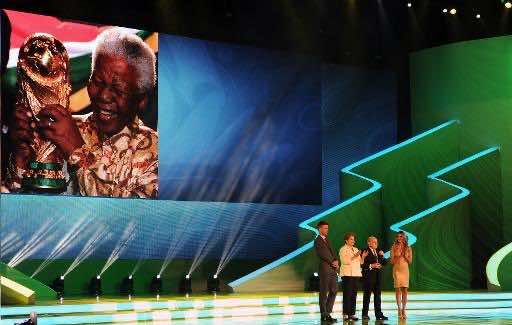 Mandela, who died Thursday aged 95, was pictured on a giant screen holding the World Cup trophy at the 2010 finals in his homeland.

Organizers had earlier lauded Mandela’s understanding of the importance of sport in breaking down barriers.

Musical tribute also came from rapper Emicida, chosen to launch the pre-draw entertainment as he included a “Thank you Mandela” lyric in his performance.

On the sidelines of the draw, although South Africa did not qualify for next year’s event, other African representatives remembered Mandela as a giant influence.

Former Cameroon star Rigobert Song said: “I met him a few years ago, during my first African Cup of Nations in South Africa. I had the opportunity to shake his hand, it was a real honor and it’s a shame he is no longer here today.”

And Cameroon coach Volker Finke said: “I’m touched by Nelson Mandela because he was the symbol of the evolution in Africa and he was the hope for a good future in Africa, for everybody, also in Europe, not only in Africa. All over the world Nelson Mandela was an example.”

“It?s a great, great man who left us. Everyone knows his story — he is someone who inspired many generations,” said Bernard Lama, who was on the French squad which lifted the 1998 World Cup.