UNITED NATIONS – Jordan was elected on Friday, December 6, to a two-year term on the UN Security Council, taking the seat that Saudi Arabia won and then rejected in a protest over Syria's civil war. 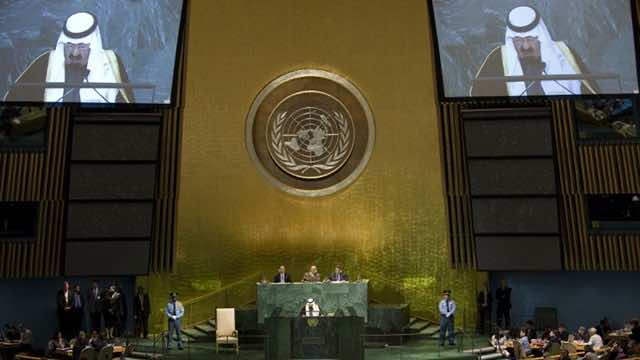 UNITED NATIONS – Jordan was elected on Friday, December 6, to a two-year term on the UN Security Council, taking the seat that Saudi Arabia won and then rejected in a protest over Syria’s civil war.

Jordan, which will take up the seat on January 1, won 178 votes from among the 193 members of the UN General Assembly and was the only candidate put forward for the vacant post.

Saudi Arabia shocked other nations by announcing on October 18 that it would not take up the seat it had been awarded the previous day, citing the council’s failure to act on the Syria conflict.

Last month, diplomats said Jordan had been reluctant to take up the Asia-Pacific seat on the 15-nation Security Council but had been persuaded to do so by Riyadh.

Diplomats and analysts concluded that the Saudi protest was aimed at US policy over Syria and the Middle East as much as toward the Security Council.

Saudi Arabia, which had been campaigning for the Security Council seat and preparing its diplomats for two years, was also angry at US moves to improve ties with arch-rival Iran, according to diplomats who said the decision could only have been taken by King Abdullah.

The Saudi government said that the council’s deadlock over the war in Syria was “irrefutable evidence and proof of the inability of the Security Council to carry out its duties and responsibilities.”

Saudi Arabia is a key backer of Syrian rebels battling President Bashar al-Assad. The government also complained about lack of progress in efforts to end the Israel-Palestinian conflict.

Saudi Arabia secured a seat on the UN Human Rights Council in November 2013.