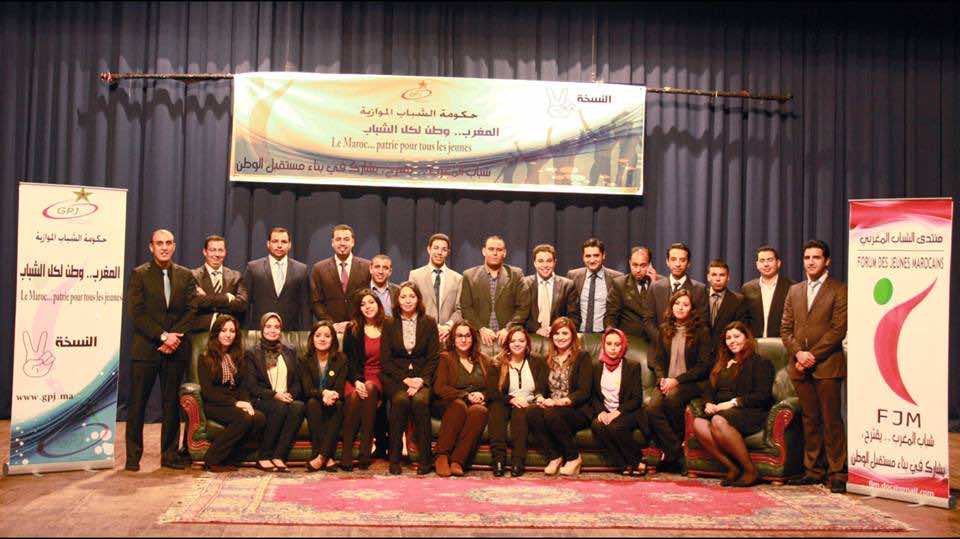 Rabat – Moroccan Youth Forum launch the second edition of the Parallel Youth Government to address youth expectations by offering a real platform for youth to participate in economic, social and political life.

The events of the Arab Spring, which affected many countries in the Arab region, have imposed a new awareness of young people’s powers and aspirations. As basic actors in the processes of political transforms, youth have stood up for more freedom, equality and solidarity. They also stand up for better future outlooks in education and work, economic and social development and a genuine contribution in the decision making process.

Youth in Morocco, unlike their counterparts in other countries, did not call for regime change in the 2011 Arab Spring protests. They called for an evolution led by King Mohammed VI towards greater democracy.

Historically, Moroccan youth have been apathetic and disillusioned with politics due to lack of representation. They have clearly demonstrated and refused to be used as voices or tools in elections to polish the image of political parties.

However, after the winds of the Arab Spring, citizens, especially youth have become more interested than ever in shaping the policies of the country. This has been demonstrated by the number of young people who took to the streets and those who participated in public forums to voice their opinion about the most pressing political issues affecting their country

Furthermore, the 2011 constitution heeded the young people’s demands by placing them at the core of this document. For example, article 33 institutionalized youth participation and allowed for the creation of The Consultative Council of Youth Community Work.

Article 12 reinforced the freedom of the creation of association and introduced the Principle of Democratic Participation, allowing civil society to be an integral part of state consultations.

Article 139 allowed for the establishment of participative mechanism at the regional level to allow local citizen to participate in local decisions.

The fruits of these constitutional reforms are reflected in the creation of the Parallel Youth Government, which will be a new way to bring government and young people closer together.

The project is backed by the Moroccan Youth Forum (FJM-Morocco), an Independent organization founded by a team of young people seeking to create a space for dialogue. It is open to all Moroccan youth to share and to discuss all the topics that concern their life and their future.

FJM is also a network of organizations with the objective of promoting active citizenship and active youth participation through meetings, training courses and seminars to develop youth competencies for a better society.

During his speech on the occasion, Ismail Hamraoui, Prime Minister of the Parallel Youth Government said this “is a unique experiment in the Arab world.”

According to Yassine Imrani, Young Minister of General Affairs and Governance for the Parallel Youth Government, “Young people in Morocco are keen to contribute to society development. They just want their accomplishment to be recognized and their pathway to prosperity to be legitimized by policy-makers and government leaders.”

“They want to be part of an environment in which they receive the support they need,” he added.

Regular meetings between heads of Moroccan Government and Parallel Youth Government to hear suggestions on how to meet their needswill be crucial steps in conducting this change and could help in the development of new policies that would benefit Moroccan youth.