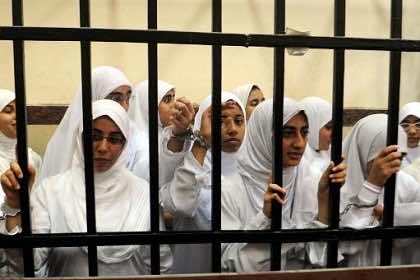 Cairo- The lawyer for 21 Egyptian women and girls jailed over an Islamist protest told appeal courts Saturday there was no evidence of their guilt and urged judges to free them.

Wearing handcuffs but holding red roses, the 21 appeared in Alexandria courts in white prison garb in a case that has sparked an outcry.

Many bore the word “Freedom” written in Arabic and English on the palms of their hands, and smiled from the metal-caged dock.

The women and girls were convicted last month of taking part in a violent protest demanding Islamist President Mohammed Morsi’s reinstatement following his overthrow by the army in July.

Fourteen women previously sentenced to 11 years in jail were ushered into the cage in the courtroom as the appeal by the seven girls was heard in an adjacent juvenile court.

Their harsh sentences had shocked even supporters of the military-installed government.

Lawyer Ahmed al-Hamrawy told the court there was no evidence to convict his clients and asked the judges to release them.

“Even in Mubarak’s era there were morals. Egypt’s women and girls were a red line and they weren’t placed on trial,” he said, referring to ousted dictator Hosni Mubarak, Morsi’s predecessor.

“This is an oppressive sentence,” one defendant, Salma, told AFP during a court recess.

She said her daughter was among the seven juveniles sentenced, and explained that they had both been near the October 31 protest by chance when arrested.

“I have the right to express my opinion — this is a constitutional right, and we are currently political prisoners,” said another defendant, Aya Adel.

The prosecutor general’s office charged that the women fought with knives and threw rocks during clashes that erupted during the protest in Egypt’s second city.

Six men said to be Muslim Brotherhood leaders were tried in absentia in the same case and sentenced to 15 years.

They were found guilty of inciting the women to cut key roads in the city during the clashes.

There was a heavy police presence outside the court complex in the coastal city, where Morsi’s Islamist supporters have repeatedly clashed with opponents and security forces.

During the recess, about 100 friends and relatives of the defendants stood outside the courtroom chanting “Down with military rule.”

Hamrawy told AFP he expected the misdemeanor courts to either acquit them or release them on bail ahead of a final ruling.

The jail terms, coming in the same week as a restrictive new protest law, re-energized Islamist opposition to the interim government and drew criticism even from its secular supporters.

Hamdeen Sabbahi, a former presidential candidate and a leading dissident under Morsi, called on the interim president to pardon the girls and repeal the new law governing protests.

The military-installed government has pressed a crackdown on Morsi’s Muslim Brotherhood movement that has killed more than 1,000 people and imprisoned thousands.

Much of the Brotherhood’s leadership, including Morsi, is on trial on various charges of inciting violence.

Courts have also handed out harsh sentences to Islamist protesters, including 12 men imprisoned for 17 years after a violent protest in Cairo.

Amnesty International severely criticized the verdicts against the female protesters.

It “shows the Egyptian authorities’ determination to punish dissent,” the rights gro