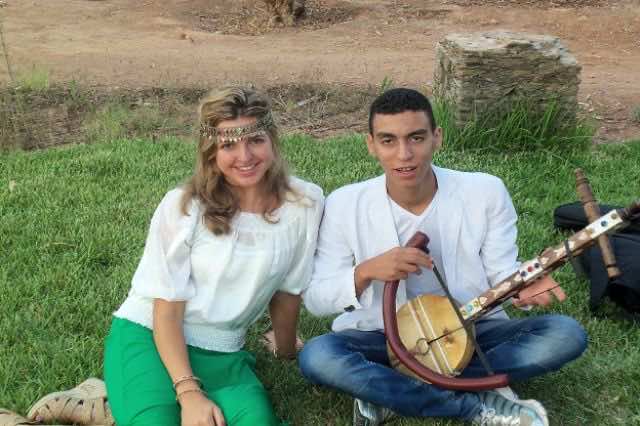 By
Larbi Arbaoui
-
Larbi is a freelance writer and assistant editor at Morocco World News.
Dec 8, 2013
Spread the love

Taroudant- The MBC website posted photo of the American singer Jennifer Grout with a young man holding Ribbab, an Amazigh music instrument, allegedly to be her fiancé.

The MBC said that the young man in the photo is Jennifer’s fiancé and he is an Amazigh musician performing in the famous square, Jamaa Alfna, in Marrakech.

Jennifer Grout, 23-year-old singer from Boston, moved to Marrakesh last June, where she’s been performing Amazigh music and learning both the Amazigh language and Moroccan Arabic with the help of her fiancé, Said.

Jennifer Grout has acknowledged, as reported by MBC, that during her saty in Morocco, accompanied by her fiance Said, a Moroccan woman nicknamed her “Shahinaz,” a nickname that Grout liked and decided to use it as her artistic name.

The American singer, who doesn’t speak standard Arabic, has become a phenomenon across the Middle East for her flawless renditions of classic songs on the spinoff series Arabs Got Talent.

A famous video on Youtube showed her performing a beautiful Amazigh song with an angelic voice that baffled the Amazigh audience.

A classically trained vocalist, Grout immersed herself in a classical Arabic music.

Jennifer Grout astonished the Arabs Got Talent audience by performing amazingly Oum Kalthoum’s “Ba’eed ‘annuk” — “Far From You,” and captivated the fans of classical music by her voice that got her the second spot in the final of the third season the showt, which was held in Beirut on Saturday night.