NAIROBI- Anadolu Agency (AA) asked prominent South African Muslim intellectuals to express their opinions on Mandela’s contribution to the Muslim Community.  Here is a picture of how Mandela, known by locals as Madiba, was revered in the community. 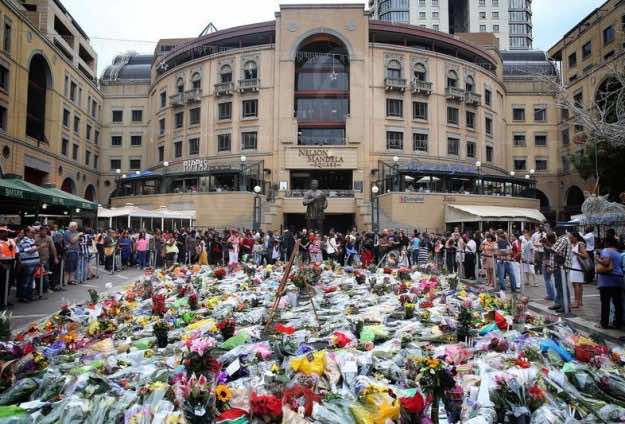 NAIROBI- Anadolu Agency (AA) asked prominent South African Muslim intellectuals to express their opinions on Mandela’s contribution to the Muslim Community.  Here is a picture of how Mandela, known by locals as Madiba, was revered in the community.

“Islam came to Southern Africa via Indonesian-Malaysian political prisoners banished from their homelands by the British. They fought the colonial occupation of their lands and were imprisoned on Robben Island long before it became home to Nelson Mandela and others” said Dr. Suliman.

Dr. Suliman said Islam was tolerated during the Dutch-British rule if it was quiet and unseen in the public and no open practice was allowed. He added that, under Afrikaner rule after independence from the British, Islam was allowed within the confines of segregated living areas that defined apartheid policy and the practice of Islam was not allowed to other races.

He noted that Muslims were always an integral part of the anti-apartheid struggle and many of them had worked closely with Mandela.

Dr. Suliman declared that along with Mandela’s contribution to both to society and to liberating the country from apartheid, he also liberated Muslims and the practising of Islam, because an integral part of post-apartheid constitution is the clause that guarantees freedom of religion. He was quoted as saying “even today we believe Muslims in South Africa have the greatest freedom to practice their religion in comparison to any other country in the world; so in fact the liberation struggle freed Muslims in many ways.”

He compares Mandela’s traits to the Prophet’s, declaring that Muslims hold Mandela in very high regard and many of the traits he showed were those that any good Muslim should have.  “His compassion, magnanimity and humility are traits of our prophet Mohammed, peace be upon him.” he said.

Dr. Suliman also noted that Mandela when President of the country formed the National Religious Council and acted as advisor on the board to the presidency where he often consulted with religious leaders.

“Mr. Mandela often visited masjids to give talks and meet people” said Suliman, displaying how the former president dealt with the Muslim community. He noted that Muslims have been in every cabinet since the advent of our democracy, and also have been prominent in various roles in all aspects of South African life.

Abdulkader Tayob, professor of Islamic Studies and head of Religious Studies at University of Cape Town informed AA on Mandela’s approach to the Muslim community in South Africa.

“Mandela was loved not only because he led the nation and the world, but mainly because he touched individuals and communities and listened to their deepest hopes, fears and dreams,” said Tayob.

With regard to Mandela’s interaction with the community, he added “Mandela acknowledged and recognized their contribution in the country, their global fears and concerns with the war on terror, and their sense of belonging to South Africa. He offered a leadership model marked by a deep spirit of generosity; a quality rarely found in leaders.”

The South African poet, activist and novelist Shabbir Banoobhai also expresses his feelings to the AA reporter. Banoobhai details the suffering they endured during the Apartheid as “emotional exile at home”. He acknowledges Mandela’s contribution in his debut novel “Heretic”. Banoobhai also published a poem called “For Madiba”, expressing feelings on the day Mandela was freed in 1994. In his poem, Madiba’s smile symbolizes freedom.

Former Muslim Judicial Council MJC leader Sheik Ebrahim Gabriels commented that before 1994 “our children were forced to learn the bible at school.” “After Madiba came to power, he told the world that South Africa was a free country of many religions. He also famously told the world that South Africa would not truly be able to enjoy freedom, until Palestine was free,” said Gabriels.