CAIRO- Along with Badie, other defendants – including senior Brotherhood members Mohamed al-Beltagi and Essam al-Erian, as well as Salafist preacher Safwat Hegazi – showed up at the trial's first session. 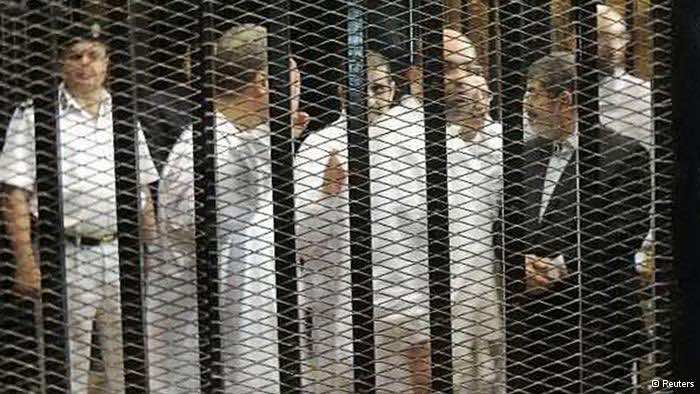 CAIRO- Along with Badie, other defendants – including senior Brotherhood members Mohamed al-Beltagi and Essam al-Erian, as well as Salafist preacher Safwat Hegazi – showed up at the trial’s first session.

Mohamed Badie, supreme leader of Egypt’s Muslim Brotherhood, appeared in a Cairo court on Monday for the first time since his August arrest.

Along with Badie, other defendants – including senior Brotherhood members Mohamed al-Beltagi and Essam al-Erian, as well as Salafist preacher Safwat Hegazi – showed up at the trial’s first session.

The defendants face charges of inciting violence in connection with deadly clashes in July on Giza’s Bahr al-Aazam Street that left seven dead and dozens injured.

Presiding judges had to suspend court proceedings for ten minutes to allow defense lawyers to speak with their clients.

Upon entering the cage, the accused men immediately began chanting slogans against the court.

“Free revolutionaries, we will complete the path [of revolution] to the end,” they shouted in unison.

A heavy security presence could be seen in the vicinity of the courthouse, located adjacent to Cairo’s notorious Tora Prison.

Egyptian authorities have unleashed a massive crackdown on the Muslim Brotherhood since the violent August 14 dispersal of two pro-democracy sit-ins in which hundreds of demonstrators were killed.

Badie, the top leader of the Brotherhood, the group from which ousted president Mohamed Morsi hails, was arrested on August 20 in an apartment in eastern Cairo six days after security forces violently dispersed the two pro-Morsi sit-ins.

Badie has since been held at Tora Prison.

The Muslim Brotherhood leader is also expected to appear in court Wednesday to answer charges related to the killing of demonstrators outside the group’s Cairo headquarters on June 30.

Badie and his co-defendants, along with a number of independent observers, say the charges arrayed against them are politically motivated.