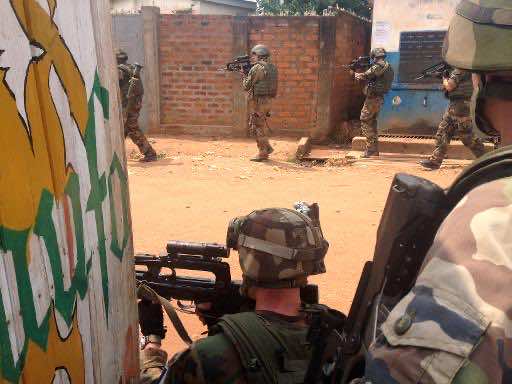 But Paris warned the task would be difficult as former Seleka rebels who seized power in a March coup shed their combat gear to avoid detection, and clashed sporadically with soldiers dispatched to quell violence in the unstable country.

Announcing the beginning of the disarmament, the army’s general staff said the process was going smoothly for the moment, despite a brief shoot-out Monday morning between soldiers and armed men near the airport.

French Foreign Minister Laurent Fabius warned that the disarmament would not be “an easy task”.

“The problem is that many of the former Seleka (rebels) have traded their uniforms for civilian clothes… and it is difficult to identify individuals,” he said on France Inter radio. 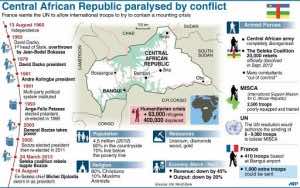 France is deploying 1,600 soldiers to its former colony, which has plunged into chaos since the Seleka rebels seized power, with reports of widespread rape and public killings taking place.

Fabius said former Seleka rebel leader turned interim president Michel Djotodia had appealed to his former fighters to give up arms, but some have gone rogue and imposed a reign of terror in the countryside.

The capital Bangui has also been the scene of bloodshed over the past three days, and nearly 400 people have been killed in the violence, Fabius said.

“We have explained to everyone by radio and through other available media that they should bring back weapons,” Fabius said.

“If this does not yield sufficient results, force will be employed,” he said.

French President Francois Hollande, who sent troops into the west African country of Mali earlier this year to stop Islamists and Tuareg rebels from advancing on the capital Bamako, has said France cannot turn a blind eye to the massacres perpetrated in the Central African Republic.

But the military intervention has prompted criticism from the public over its cost at a difficult time for the French economy.

Fabius on Monday said the cost of the deployment was “minimal” as the French troops were drawn from bases in other African countries.

“If we did not intervene quickly it would have cost much more,” he said.

“If in place of a few hundred killed, there had been tens of thousands of deaths we would have had in any case to intervene in a country that was totally destroyed.”

France has also been anxious to avoid charges of medding in its former African colony for political or economic reasons.

It has repeatedly emphasised that it troops are being dispatched to the CAR to reinforce a 2,500-strong African Union peacekeeping mission and that it is ultimately Africa’s responsibility to tackle the various crises on the continent.

There have been no major incidents since the French deployment. French troops came under fire near the airport on Sunday and Monday, but there were no indications of casualties.

France has more than 5,300 troops stationed in a string of bases across western and central Africa, according to defence ministry figures.

The UN childrens’ agency UNICEF told AFP in Bangui that nearly 480,000 people — mostly women and children — had been displaced since the country of 4.6 million people plunged into chaos after the March coup.

But the deadly attacks witnessed before the French troops rolled in have ceased and life in Bangui is slowly returning to normal.

Djotodia, the first Muslim leader of the CAR, disbanded Seleka when he took power, but while some militiamen remained loyal to him, others wreaked havoc.

Local Christians responded by forming vigilante groups and the government was never able to assert its authority over the Christian-majority country.

Reports have highlighted a series of horrors, with security forces and militia gangs raping with impunity, carrying out public killings and razing entire villages.

Djotodia has accused forces loyal to the exiled former president Francois Bozize, whom he had toppled, of being behind the vigilante groups.

London-based rights group Amnesty International has said that many involved in the latest violence are child fighters recruited by the former rebels. It said some were reportedly armed with axes and iron bars.