CAIRO - Egypt's Muslim Brotherhood chief Mohammed Badie Monday attended the first session of his second trial, his lawyer said, marking his first public appearance since he was arrested in August. 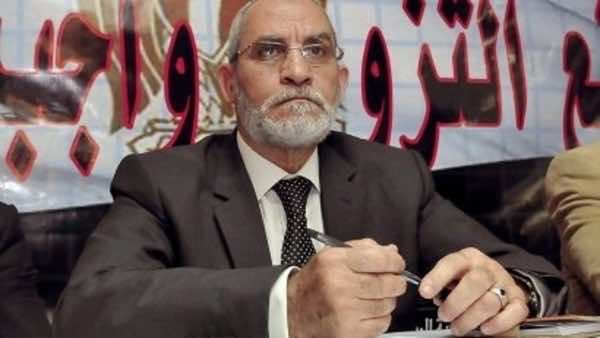 CAIRO – Egypt’s Muslim Brotherhood chief Mohammed Badie Monday attended the first session of his second trial, his lawyer said, marking his first public appearance since he was arrested in August.

Badie, the Brotherhood’s Supreme Guide, appeared alongside 14 other members of the Islamist movement to face charges of inciting violence in the Cairo neighbourhood of Bahr al-Aazam that led to deadly clashes in July, lawyer Mohamed Damaty said.

“All 15 defendants including Badie attended the trial today,” Damaty told reporters outside a Cairo police academy where Monday’s session was held.

Other senior Brotherhood officials in the dock included Essam al-Erian and Mohammed al-Beltagui, he said, adding that the trial was later adjourned to
February 11.

Badie and  his two deputies, Khairat al-Shater and Rashad Bayoumi, are already being tried on separate charges related to the deaths of protesters who stormed the Brotherhood’s Cairo headquarters on June 30.

Badie was not present at the two sessions held so far of his first trial.

“There is no proof that they (defendants) have committed the crimes that they are accused of,” he said.

“We asked for their release but the court has adjourned the proceedings to February 11.” Only a few Egyptian journalists were allowed to attend Monday’s opening session.

Several Muslim Brotherhood leaders and members including Badie have been put on trial as part of a massive crackdown by Egypt’s new military-installed authorities against the movement following the army’s overthrow of Islamist president Mohamed Morsi in July.

Morsi himself belongs to the Brotherhood movement, which a Cairo court banned in September.

More than 1,000 people have been killed since Morsi’s ouster — mainly his supporters — and the authorities have arrested thousands more, mostly Islamists.

Morsi is on trial for his alleged involvement in the deaths of protesters outside the presidential palace in December 2012.

The army ousted Morsi, Egypt’s first democratically elected president, on July 3 after millions of people took to the streets to demand his resignation, accusing him of betraying the revolution that brought him to power.