TUNIS - Lawyers for a Tunisian woman allegedly raped by two policemen asked Monday for the trial to be delayed so threats to her family and information about the accused can be considered. 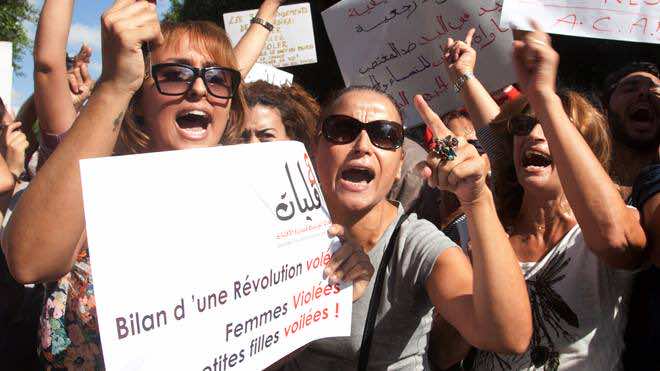 TUNIS – Lawyers for a Tunisian woman allegedly raped by two policemen asked Monday for the trial to be delayed so threats to her family and information about the accused can be considered.

Emna Zahrouni told Monday’s court hearing that one of the policemen on trial, Walid Feriani, “has a disciplinary record with the interior minister in a similar context.

“We need to see this file,” she added.

Monia Bousselmi, another lawyer for the young woman, demanded that one of the three accused, who is on trial for extorting money from her boyfriend, be tried for “complicity to rape”.

A third lawyer, Koutheir Bouallegue, asked for the trial to be adjourned so a threatening letter which the woman’s father received could be taken into account, without detailing the contents of the letter.

Defence lawyers also called for the trial to be postponed in order to examine the woman’s medical file.

The judge adjourned the hearing in the early afternoon without saying when the trial, which has already been put back twice, would resume.

The three accused officers are being held in custody, two of them, Chawki Ben Ammar and Walid Feriani, on rape charges.

The police say they found the couple having sex in their car in a Tunis suburb in September 2012.

They then took the woman to a police car, where two of them raped her, according to a judicial source, while the third policemen allegedly tried to extort money from her fiance at a bank cashpoint.

The public prosecution tried unsuccessfully to bring indecency charges against the couple, sparking a storm of protest and a campaign of support for the young woman.

The Islamist-led government was sharply criticised for its handling of the case, which the opposition have presented as proof of the ruling Ennahda party’s efforts to impose Islamic values on society.