TRIPOLI - Amnesty International alleged Monday a Libyan soldier was tortured to death by members of his own unit, calling on authorities to investigate the case and break with such Kadhafi-era practices. 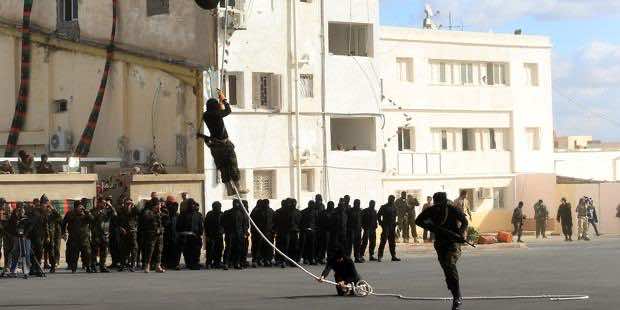 TRIPOLI – Amnesty International alleged Monday a Libyan soldier was tortured to death by members of his own unit, calling on authorities to investigate the case and break with such Kadhafi-era practices.

“Hussein Radwan Raheel, 37, who served with the Saiqa Forces, an elite army unit under the ministry of defence, was severely beaten and subjected to electric shocks,” Amnesty said quoting family members.

It said the soldier “was tortured to death last week following 10 hours of interrogation by his own army unit” following the disappearance of a military vehicle from the unit’s Tripoli compound.

“A forensic report and photos of his body seen by the organisation also indicate he was tortured,” added the watchdog.

It called for an independent probe, saying it “fears that a military investigation will lack transparency and independence and will only lead to whitewashing abuse”.

Amnesty’s Hassiba Hadj Sahraoui said torture was widespread under the toppled regime of dictator Moamer Kadhafi, who was killed in the 2011 uprising.

She charged that ill-treatment and rights violations still flourished under the rule of Libya’s new authorities who also have “turned a blind eye to abuses by militias”.

“Torture and ill-treatment were routinely used by the state to terrorise the Libyan people under Kadhafi’s brutal rule. The Libyan authorities must show that the country has made a clean break with the past by sending a strong message that human rights violations by state officials will not be tolerated,” said Hadj Sahraoui.

Amnesty said there had been 20 deaths in custody in Libya between September 2011 and July 2012.

It said its delegates toured 27 prisons and detention centres this year, including those run by former rebels, and found torture was widespread in some and systematic in others.

Libya has been marred by lawlessness since the 2011 uprising, which much of the unrest blamed on the former rebels who have resisted appeals by authorities to integrate into the regular armed forces.