NEW YORK- The International Atomic Energy Agency will inspect the condition of 6,400 barrels of yellowcake stockpiled in Libya later this month, the UN special representative for Libya said Monday. 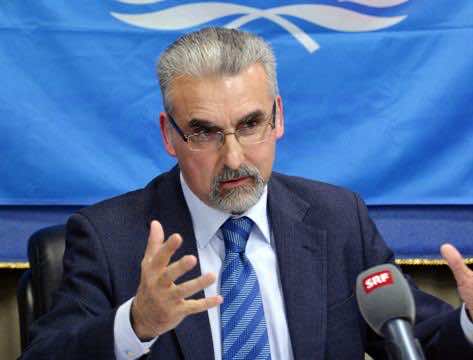 NEW YORK- The International Atomic Energy Agency will inspect the condition of 6,400 barrels of yellowcake stockpiled in Libya later this month, the UN special representative for Libya said Monday.

Tarek Mitri said the uranium concentrate was stored at a former military installation near Sabha under the control of a Libyan army battalion.

With the backing of the UN Support Mission in Libya, which Mitri heads, “an inspection team from the IAEA will visit this month to verify existing stockpiles and conditions of storage,” he said.

Former Libyan leader Moamer Kadhafi in 2003 renounced his efforts to acquire weapons of mass destruction, including nuclear weapons. But a large stockpile of yellowcake was found intact after the uprising that toppled his regime in 2011.

After visiting the Sabha site, in a desert oasis, in December 2011, the IAEA recommended the rapid sale and transfer of the yellowcake, warning that the storage conditions were deteriorating and security at the site was inadequate.

The UN nuclear watchdog however said there was little risk of theft because of the size and weight of the barrels.

Yellowcake, a powder consisting of around 80 percent uranium oxide, is used in the preparation of nuclear fuel for reactors. It also can be enriched for use in nuclear weapons.

Mitri also said a mission from the Organisation for the Prohibition of Chemical Weapons will go to Libya this month to observe and verify the destruction of Libyan chemical weapons.

Nine tons of mustard gas were destroyed in Libya in April and May under OPCW supervision.

Concerning the Kadhafi regime’s enormous arsenal of rocket launchers, Mitri said he had received preliminary reports but had asked the Libyan authorities to provide greater documentation.