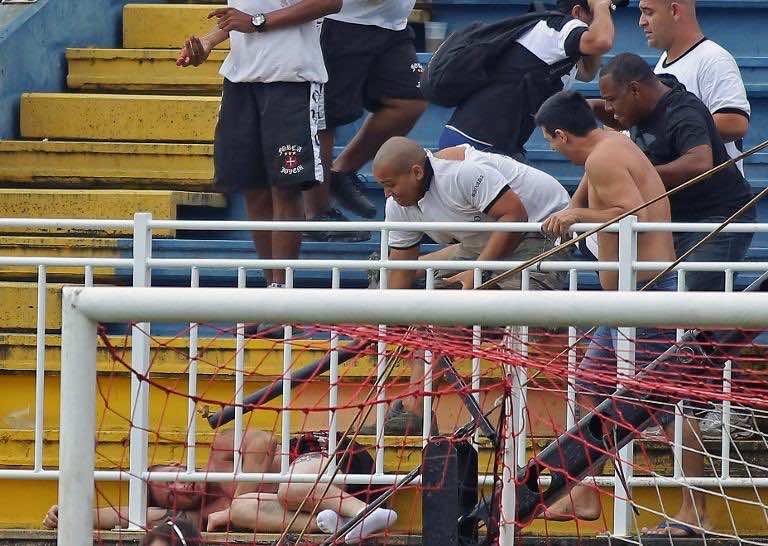 President Dilma Rousseff said Brazil could not and would not tolerate soccer violence after fans of Atletico Paranaense and Vasco Da Gama fought pitched battles in the southern city of Joinville.

Graphic television footage showed hundreds of fans of both sides kicking and punching for several minutes with the game only a few minutes old, forcing the referee to call a halt for an hour as order was belatedly restored.

The violence continued unabated as the hooligans ran amok, clashing in several sections of the stands.

At least three fans were hurt with one, believed to have suffered a fractured skull airlifted to safety by helicopter.

There was further controversy after police failed to intervene and it later transpired that Atletico had only drafted private security personnel to ‘police’ a “private event.”

Rousseff was energetic in her condemnation.

“A footballing country cannot live with violence in its stadiums. This violence goes against all that we associate with football,” the president said.

“The presence of police is necessary in stadiums,” she added.

Sports Minister Aldo Rebelo also condemned the violence and vowed that his ministry would be asking why military police had not been on hand.

“Those responsible must be identified and punished,” Rebelo said.

FIFA said Sunday it regretted any form of football violence but said it should have no impact on the World Cup.

“However, for the 2014 FIFA World Cup a very comprehensive security concept is in place in an integrated operation between private and public security authorities to ensure the safety for fans, players and any other stakeholder involved in the event,” a spokesperson told AFP.

Brazilian media expressed consternation at an admission by state authorities that security inside the ground was left in the hands of private security with state police only on duty outside.

“The forces of law and order intervened later because security at the match was under the responsibility of a private company employed by Atletico,” said police spokesman Adilson Moreira.

A spokeswoman for Santa Catarina state’s public prosecutor told AFP that “this was an isolated case” and that normally police would be expected to be inside the stadium rather than just outside.

Only after the fans had been left to their own violent devices did security forces wielding guns and firing rubber bullets finally intervene.

Atletico were playing the match in Joinville, some 135 km (80 miles) south of its home city of Curitiba — which will host World Cup action next year — following previous disorder.

One Atletico player was in tears as he looked on incredulously at prostrate fans being kicked in the head and beaten.

“I’ve been playing for 20 years and I’ve never seen anything like this in person. We will have a World Cup in our country and we know these images will be shown everywhere,” defender Luiz Alberto told reporters.

The violence was the last thing Brazil needed as it struggles to prepare 12 host venues for the World Cup with at least three stadiums still running behind schedule, including Sao Paulo, slated to host the opening match on June 12.

Following their defeat Vasco da Gama were relegated from the elite division of Brazilian football.

“It’s regrettable to see these type of things at this time when everyone is talking about the next World Cup in the country,” said Vasco technical director Adilson Batista.

Paranaense technical chief, Vagner Mancini, said he was shocked by the fighting.

“I have never seen such scenes. It made us want to leave the stadium and go home,” he said.