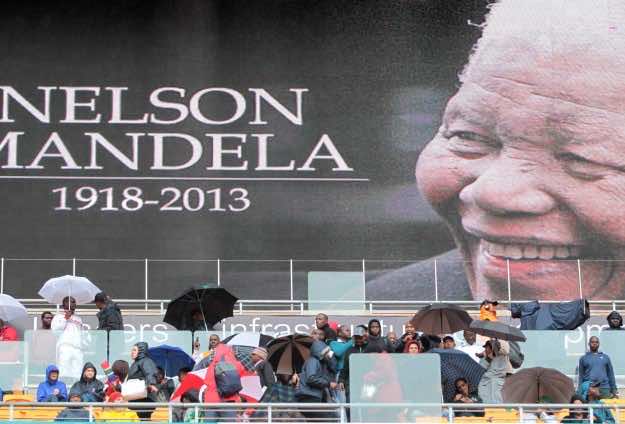 Heavy rainfall, however, has made it difficult for residents of the nearby Soweto Township – where Mandela once lived – to reach the stadium on foot.

“The rain, the grass and the mud on the footpaths were a challenge,” Jennifer Mohai, who lives in Orlando West, told Anadolu Agency from outside the stadium.

Braving heavy rains, people lined up for hours outside the stadium to pass through airtight security.

“They said we cannot go inside with our umbrellas for security reasons,” Mohai said. “But later, we were allowed to take our umbrellas because it is still raining.”

Many people sang and danced, while others carried banners bearing the image of Mandela, who passed away on Thursday at the age of 95.

Security has been stepped up in Johannesburg, with numerous police details assigned to secure the FNB Stadium.

No cars are allowed near the venue, while adjacent roads have been cordoned off.

A number of tourists spent the night outside the stadium in tents in anticipation of Tuesday’s memorial.

“We spent the whole night outside waiting for the gates to be opened,” Nyarai Domingo, a tourist from Mozambique, told AA.

“We’re all wet, but still we’re here to celebrate Mandela’s life,” she added with a smile.

Domingo said they had hoped to find good seats with a clear view of the event, but that the rain had forced them to sit at the top of the stadium, where there is some shelter.

On Tuesday morning, work at the stadium was ongoing, as officials rushed to finish erecting the last stand in time for the event.

The four-hour memorial service is scheduled to begin at 11am local time.

President Jacob Zuma is expected to address the mourners, who will include a galaxy of international dignitaries including US President Barak Obama and UN Secretary-General Ban Ki-moon.

Mandela’s body will not be displayed at the memorial service.

Giant television screens have been set up at several venues throughout the city so that the public can follow the event, which will be broadcast live.

South Africans will have the opportunity to view Mandela’s body from Wednesday to Friday at the Union Building in Pretoria, where the late leader’s body will lie in state ahead of Sunday’s funeral.

Mandela, South Africa’s first black president, will finally be laid to rest on Sunday at his rural home in Qunu village in the Eastern Cape.