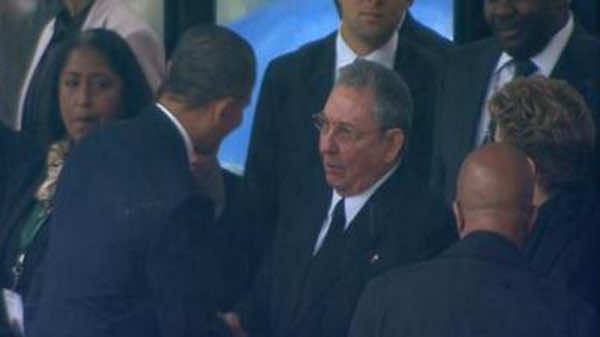 Obama offered the handshake before taking the stage to eulogise Mandela, but minutes later, made a clear swipe at states like Cuba, saying those who proclaim Mandela’s legacy must honour its meaning by easing curbs on freedom.

The handshake between Obama and the brother who took over the duties of longtime Cuban dictator Fidel Castro was seen by millions around the world on live television. A White House official said it was not “pre-planned”.

The Cuban government hailed it as a hopeful sign, writing on its website: “May this… be the beginning of the end of the US aggressions.”

But it remained unclear whether the gesture would presage a meaningful thaw in relations across the shark-infested waters off Cuba.

It comes as Obama seeks to live up to his campaign promise made in 2007 to reach out directly to US enemies as president — and after he spoke by phone to Iranian President Hassan Rouhani in September.

The United States maintains a five-decades-old embargo against the communist island nation, which Havana says has cost the economy $1.1 trillion and have only limited ties owing to the iron-fisted rule of the Castros.

Obama quickly faced some domestic backlash from his gesture, as Cuba is a fiercely divisive issue in US politics.

“It gives Raul some propaganda, to continue to prop up his dictatorial, brutal regime,” Republican Senator John McCain told reporters in Washington.

“Why should you shake hands with somebody who is keeping Americans in prison?”

Vehemently anti-Castro Cuban-Americans make up a sizable portion of voters and political donors in Florida, a battleground state where US presidential elections can be won or lost.

Obama’s clear jab at states like Cuba, which claim kinship with Mandela but do not follow the example of a man who forgave his enemies and built a pluralistic state, may have been intended to insulate him from some domestic criticism.

“There are too many leaders who claim solidarity with Madiba’s struggle for freedom, but do not tolerate dissent from their own people,” Obama said, stabbing his finger in the air in the rain-sodden stadium hosting the event.

A White House official said the handshake was not a “pre-planned encounter”, emphasising that “today is about honouring Nelson Mandela, and that was the president’s singular focus at the memorial service.”

As a presidential candidate, Obama was pilloried as naive and dangerous by rivals from both parties for suggesting that as president he would be willing to talk to foes without preconditions.

As he ran for re-election, Obama’s success in tracking down and killing Osama bin Laden and a fearsome drone war largely insulated him from allegations of weakness in foreign and security policy.

But the interim nuclear deal between US and world powers reached last month and his decision to call off 11th-hour military strikes on Syria over the use of chemical weapons have revived opposition attacks over his foreign policy spine.

It was unclear whether Tuesday’s gesture would significantly thaw relations. In 2000, then president Bill Clinton shook the hand of Fidel Castro at the UN General Assembly in New York.

There was no picture of the moment and the White House initially denied it had occurred.

Havana and Washington have not had diplomatic relations since 1961, two years after Fidel Castro came to power in the Cuban revolution.

Tensions have eased since Obama took office, with both countries reaching a series of agreements seen as confidence-building measures including cooperation on air and maritime rescue and migration issues.

In 2011 Obama eased restrictions on visas, remittances and travel.

The move was designed to expand religious and educational travel, allow any airport to offer charter flights to the country and restore cultural initiatives suspended by the previous Bush administration.

Talks are under way to resume a direct postal service between the two countries. 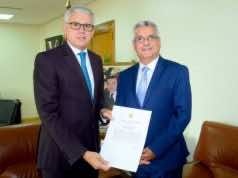