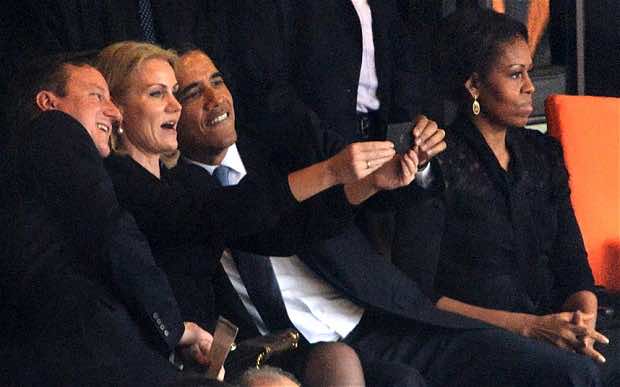 An image of US President Barack Obama taking a “selfie” photo with Danish Prime Minister Helle Thorning-Schmidt and British Prime Minister David Cameron, during Nelson Mandela’s memorial event, made the front pages of British papers on Wednesday sparking a debate.

The British press on Wednesday covered  the “selfie” photo of three world leaders posing together for a photo taken by a mobile phone during the memorial service of late South African leader Nelson Mandela. The photograph appeared in their front pages and it was criticized as being “disrespectful” to Mandela.

The photo was placed in the front pages of The Times, The Daily Telegraph, The Daily Mail and The Sun. The Times commented, “Smile for a special selfie” under the photo while The Sun wrote down, “No selfie respect”.

Additionally, the British press also commented under the photo that Obama’s spouse Michelle Obama was not “amused” as Barack Obama was getting a photo taken with Danish Premier Thorning-Schmidt. In the image, it is seen that the First Lady is sitting next to three leaders while they pose for the mobile phone photo.

Tuesday’s memorial service for Mandela at the FNB stadium in Johannesburg brought many world leaders and high level officials together.

In November, the world “selfie” has been named as word of the year by Oxford Dictionaries. “Selfie” means, “a photograph that one has taken of oneself, typically one taken with a smartphone or webcam and uploaded to a social media”. Previously, US First Lady Michelle Obama and former US Secretary of State Hillary Clinton used the word “selfie” when they shared their photos taken by a smartphone.