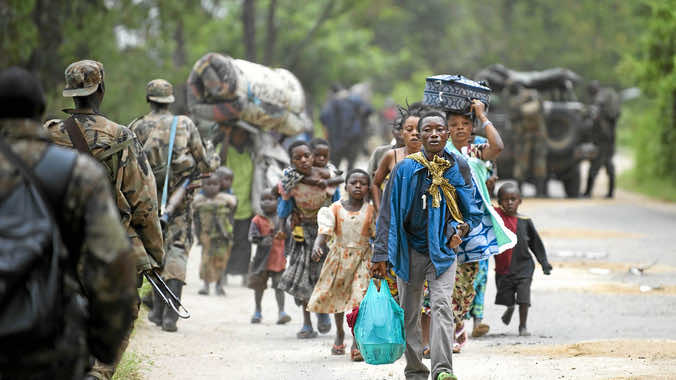 “I pleaded with the truck driver, who decided to help me,” he told Anadolu Agency from Cameroon.

“He drove me to Garoua [the capital of Cameroon’s North Region], where I met 40 other Central African citizens fleeing the war,” Mohamed recounted.

He says he fled his country after Christian militiamen raided his home some 5km from downtown Bangui and, he alleges, killed more than 60 people.

“Militiamen were going house-to-house, asking for people’s names,” he claimed. “If you gave a Muslim name, they would kill you.”

Mohamed is one of an as-yet-undetermined number of CAR nationals who have crossed the border into neighboring Cameroon seeking refuge.

“I came here to live with a distant relative,” said Mohamed, who packed a light bag and fled into the wilderness after witnessing what he called “horrific murders” perpetrated by Christian militiamen.

According to estimates by humanitarian organizations, at least 460 people have been killed in Bangui within the last five days alone.

The landlocked African country descended into anarchy in March, when Seleka rebels from the mostly-Muslim north ousted president François Bozize.

A Christian who had been in office for ten years, Bozize had enjoyed the strong support of the country’s Christian majority.

The months since have witnessed frequent clashes between Seleka fighters and Christian anti-balaka militias that have emerged recently.

Mohamed, who now earns a living by selling banana on the streets of Douala, still doesn’t know what has befallen his family back home.

“Ever since I came to Cameroon, I haven’t communicated with my parents,” he lamented. “I don’t know whether they’re still alive or not.”

According to Mohamed, the conflict in CAR had initially been a political one. But it eventually turned into a religious war, he said, after the country’s Christian majority realized that Michael Djotodia – the Selka leader installed as interim president – was a Muslim.

“At first, local politicians thought Djotodia was a Christian because of his name,” Mohamed said. “But when they saw him coming out of a mosque, they started a religious campaign against the president and the Muslim community.”

He went on to accuse local politicians of inflaming the passions of non-Muslims by telling them that their country was being taken over by Muslims from Chad, Senegal and Sudan.

This, according to Mohamed, sparked the current spate of sectarian violence, which has served to divide many of the country’s interfaith families.

“My mother fled into the bush with her Christian parents,” one 33-year-old woman, who identified herself only as Suzan, told AA.

“My [Muslim] father couldn’t protect them since he would have also been killed by the Muslim Seleka rebels,” she said.

According to the CIA factbook, Christians account for around 50 percent of CAR’s total population while Muslims account for roughly 15 percent.

Suzan decided to flee for her life after seeing “hundreds of dead bodies.”

“Whenever my baby cried at night, I was terrified that the militants would hear and discover us hiding in the bushes,” she recalled.