CAIRO - A car bomb exploded near an Egyptian police building on Thursday in the Suez Canal city of Ismailiya, wounding at least 25 policemen, security officials said. 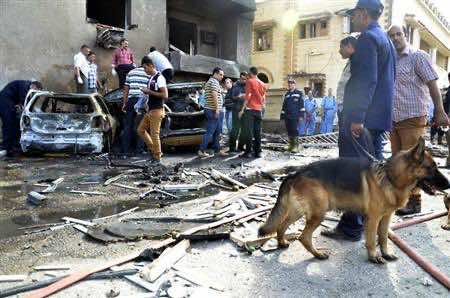 CAIRO – A car bomb exploded near an Egyptian police building on Thursday in the Suez Canal city of Ismailiya, wounding at least 25 policemen, security officials said.

The bombing was followed by gunshots, the officials said, as witnesses said the noise of the explosion was huge and that several ambulances rushed to the scene.

Ismailiya and surrounding areas in the Sinai have seen regular militant attacks on police and military personnel, especially since the military toppled Islamist president Mohamed Morsi on July 3.

An Al-Qaeda inspired group operating in the Sinai Peninsula, Ansar Beit al-Maqdis, has claimed several of these attacks, including a car bombing outside a military building in Ismailiya on October 19 that wounded six soldiers.

The group had also claimed a car bombing in September that targeted the convoy of Egypt’s interior minister Mohamed Ibrahim in Cairo. He was not hurt in that attack.

The military has been conducting an extensive operation in the Sinai Peninsula, east of the Suez Canal, to crack down on Islamist militants.