President Francois Hollande said France and Brazil should double trade between them, as he met his counterpart Dilma Rousseff here Thursday at the start of a two-day state visit. 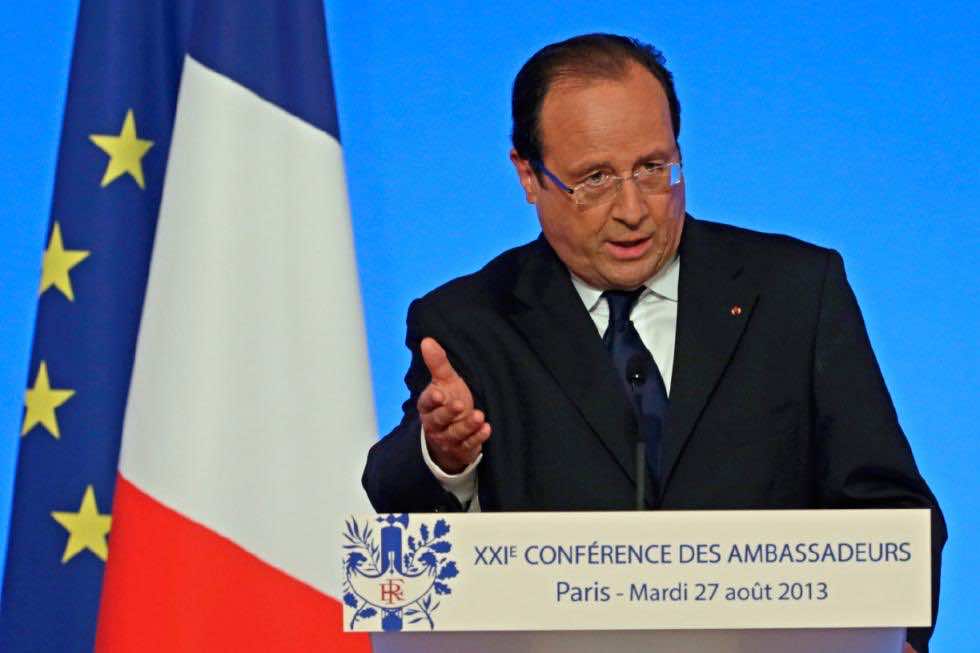 President Francois Hollande said France and Brazil should double trade between them, as he met his counterpart Dilma Rousseff here Thursday at the start of a two-day state visit.

“Despite the crisis, our trade exchanges have steadily increased and have even doubled in 10 years,” said the French leader, with Rousseff at his side.

“We have big ambitions, Brazil and France, to again double our trade in the coming years,” he added.

“We have had between the two countries a strategic partnership since 2006,” Hollande said, adding “We must strengthen it.”

She said Brazil would acquire a supercomputer from France, which will set up centers in this country and transfer supercomputing technology.

Rousseff said the stepped-up exchanges illustrated the growing trend by French and international entrepreneurs “to link the prosperity of their companies to the Brazilian market.”

She also thanked France for its support for the joint Brazilian-German UN initiative to strengthen Internet privacy and governance in the wake of recent disclosures of massive US cyberspying.

“We are very much interested in a partnership with France in all aspects of cyberdefense.”

Brasilia has been angered by reports of US electronic spying on Brazilian government communications, as well as phone call data and emails of millions of Brazilians.

Those disclosures, drawn from revelations by US intelligence leaker Edward Snowden, led Rousseff to reprimand the United States at the UN General Assembly in September and to scrap a planned state visit to Washington.

France is the fifth biggest investor in Brazil, where around 600 French companies have set up shop and bilateral trade totals $8.8 billion, according to French officials.

According to the Brazilian side, which uses different accounting methods, two-way trade reached $10 billion last year, with a $1.8 billion deficit for Brazil.

French companies are involved in key strategic and infrastructure projects in Brazil, including in the aerospace, military, energy, automobile, hotel and food sectors.

And France is the third choice destination for Brazilian students taking part in the government’s “Science without Borders” program.

Launched last year, it aims to hand out 75,000 government scholarships for study in top foreign institutions to try to jumpstart Brazil’s technology and innovation sectors.

A Brazilian foreign ministry official said: “France is one of Brazil’s key partners. We have this level of cooperation with very few countries.”

Several contracts are to be signed, including French energy giant Total’s participation in exploring the huge ultra-deepwater Libra oil field and the supply of a $550 million civilian-military telecoms satellite by French-Italian firm Thales Alenia Space.

France’s nuclear energy giant Areva was to sign a contract worth more than $1.37 billion to build a third reactor at the Angra nuclear power plant in Rio de Janeiro state.

No decision was expected on France’s bid to sell its Rafale fighter jet. Brazil is looking to buy 36 multi-purpose jets to modernize its air force — a multi-billion-dollar deal — and the issue has been at the center of bilateral talks in recent years.

Hollande was to brief Rousseff on France’s military intervention to stop sectarian violence in the Central African Republic (CAR), a former French colony.

He told reporters security was gradually returning to Bangui, the CAR capital, which he visited earlier this week following the killing of two crack French paratroopers.

Brasilia has warned Paris against succumbing to “old colonial temptations.”

Hollande, who was accompanied by a large business delegation and eight ministers, attended a meeting with corporate leaders after his arrival in Brasilia.

He also toured the site of the new Franco-Brazilian Francois Mitterrand lycee, which will welcome 800 students.

Hollande was to meet with ex-president Luiz Inacio Lula da Silva later in the day.

The French president was to meet Brazilian business leaders in Sao Paulo and the local French community Friday before flying to neighboring French Guiana.

Rai, as he was known, had a brilliant career with Paris Saint-Germain in the 1990s.