Beijing — China has lost its key North Korean interlocutor with the purging of Kim Jong-Un's uncle, but analysts say the young leader's tightening grip on power may be welcomed by Beijing, which prizes stability in its wayward nuclear-armed ally. 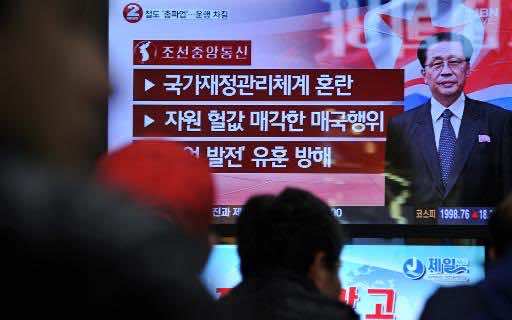 Beijing — China has lost its key North Korean interlocutor with the purging of Kim Jong-Un’s uncle, but analysts say the young leader’s tightening grip on power may be welcomed by Beijing, which prizes stability in its wayward nuclear-armed ally.

Jang Song-Thaek was the second-most powerful member of North Korea’s regime and an important link between Pyongyang and Beijing before his dramatic ouster last week, accused of being a corrupt, drug-using womaniser.

In the two years since the death of Kim Jong-Il, at least four of the seven leaders who joined the younger Kim in marching alongside his father’s hearse at the funeral — a core leadership group dubbed the “Gang of Seven” by South Korean media — have now reportedly been sidelined, with further military and political purges likely.

“In a sense, the Chinese interlocutors in the core North Korean leadership just evaporated,” said Jingdong Yuan, a University of Sydney professor specialising in Chinese defence and foreign policy.

“Now, who will be the intermediary between Beijing and Pyongyang?” Yuan asked.

But while Beijing was watching the purges with concern, he said, the end result will benefit China if Kim succeeds in cementing his authority.

“In one sense, obviously, if he can consolidate power, at least there’s the known factor,” Yuan said. “The uncertainty is what China does not want to see.”

China is the North’s sole major ally and economic lifeline — it sold the North almost 450,000 tonnes of oil in the first 10 months of this year, according to customs figures.

Jang has played a key role in links between the two nations, which fought alongside each other at enormous loss of life during the 1950-53 Korean War.

The 67-year-old accompanied Kim’s father and predecessor Kim Jong-Il on three trips to China in 2010 and 2011 and is known to have led the country’s Commission for Joint Venture and Investment tasked with attracting foreign investments — mostly from China.

He was also the first high-level party official to visit China after the younger Kim took power in December 2011.

Jang was in charge of the North’s mineral exports — which account for more than half its outbound trade with China — and has been accused of selling iron at overly cheap prices.

“I think this event will affect China’s relationship with North Korea, because everybody knows Jang Song-Thaek has a close relationship with our government and was in charge of the economic cooperation with our country,” said Cai Jian, executive director of the Centre for Korean Studies at Fudan University in Shanghai.

“It’s inevitable that the North’s joint development projects with China and plans to attract foreign investments will face some difficulties for a while,” he added.

Japan’s defence minister has compared the purge to China’s decade of chaos during the Cultural Revolution.

But Leonid Petrov, a North Korea expert at Australia National University, said that any short-term uncertainty would be eclipsed by the regional benefits for China, which values stability above all and views North Korea as a bulwark against US military influence in Asia.

“(The goal for China) is to keep this area US-free, without US interference, and North Korea is a perfect kind of watchdog,” Petrov said.

“As soon as the United States and South Korea and Japan activate their security activities… North Korea starts barking, and China does not need to move a finger, because North Korea is doing the job of keeping joint US-South Korea-Japanese military preparations at bay,” he added.

“So, I think North Korea remains a very valuable ally for China despite all the trouble they cause them.”

Chinese authorities have shied away from extensive comment on Jang’s sacking, with Beijing’s foreign ministry describing it as “an internal affair” and the People’s Daily, the official mouthpiece of the Communist Party, not reporting it in print.

But in an English-language op-ed Thursday, a commentator at the state-run Global Times wrote that the charges against Jang — and the dramatic manner in which he was dragged away by uniformed officers during a meeting in Pyongyang — would probably have a chilling effect throughout the North Korean leadership.