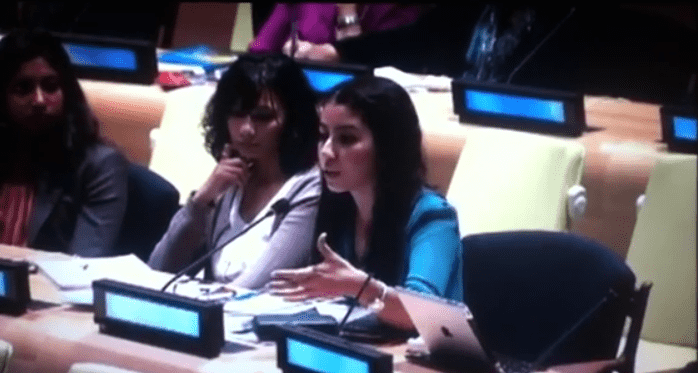 Lamia Bazir, who has been appointed representative by both the High Atlas Foundation and the Third World Network, reports on the progress made at the 5th OWG session and highlights the agenda of the 6th session.

These new goals must be:

Action-oriented, concise, easy to communicate, limited in number, aspirational, global in nature, Universally applicable to all countries while taking into account different national realities, capacities and levels of development and respecting national policies and priorities.

The Open Working Group is a byproduct of the Rio+20 outcomes, it represents an inclusive intergovernmental process open to all stakeholders, in charge of developing the post-2015 development agenda, to be agreed by the General Assembly.

The Fifth Session of the Open Working Group

The 5th session of the OWG was based on the progress made by the four previous sessions and consecrated a series of activities and meetings between the UN General Assembly, the private sector, and civil society. This meeting gathered expert panelists, open working group consistencies, Major Groups, as well as representatives of member states and civil society organizations. It was articulated around two discussions. The first discussion dealt with Sustained and Inclusive Economic Growth, Macroeconomic Policy Questions (including international Trade, International Financial System and External Debt Sustainability), Infrastructure Development and Industrialization; and the second discussion was framed around the theme of Energy.

The energy and eagerness of participants was notable since the opening of the session. Indeed, this session embodied a transformative progress since it moved away from topics on which a broad consensus was built such as: poverty, food security, health, education, water, and sanitation; and tackled the challenging issues dealing with: macroeconomic policies, industrial development, infrastructure capacity, as well as the risks posed by sovereign debt and unregulated international financial markets.

This three-days event was organized in a series of panels, nurtured by the expertise of researchers including Jagdish Baghwati, professor at Columbia University; Adnan Amin, Director General of the Renewable Energy Agency (IRENA); Jeffrey Sachs, professor at Columbia University, director of the Earth Institute and special advisor to the UN Secretary-General Ban Kimoon; Li Yong, Director General of UN Industrial Development Organization (UNIDO), Amar Bhattacharya, from the Intergovernmental Group of Twenty- Four on International Monetary Affairs and Development (G-24), and other experts.

The  panels were followed by exchanges of views as well as a deliveryof statements. Thus, the session was a very dynamic and interactive process, it was not limited to statements of Member States. It rather enabled the different stakeholders, including state representatives, civil society, major groups, and regional representatives – such as the African Group, the Arab Group, the European Union, the Least Developed Countries and Small Islands of the Pacific- to put forward their perspectives and highlight their needs.

Experts and delegates addressed the issue of responding to macro-economic considerations and growth imperatives in the new development agenda. Indeed, they highlighted that industrialization is a prerequisite to economic growth and that growth is, itself, a driver of sustainable development. “No country in history has developed without industrialization”.Therefore, they considered that the post-2015 SustainableDevelopment framework should set the enabling environment for investment, infrastructure development, and capacity building in developing and least developed countries.

Thus, delegates referred to economic goals as an indispensable dimension, rather than an opposite, of sustainable development. However, few speakers underscored potential “trade offs” between economic growth, on the one hand, and environmental and social sustainability, on the other. Moreover, if the goal is to set up a set of global goals, it is significant, to highlight a remark made by Jagdish Bhagwati. Stakeholders need to consider if these issues are “goal-able” or if they rather are policy priorities, hence instruments rather than goals. In addition to the domestic drivers to growth and development, the participants emphasized the need for an open, transparent, and rules based trading system, fair market access, and inclusiveness in international financial institutions.

On the session of Monday afternoon, professor Jeffrey Sachs director of the Earth Institute and special advisor to Ban Ki Moon presented the ten potential SDGs to the delegates. According to Sachs, the most important role of having a set of global goals is to mobilize and engage the public.The provisional list focuses on ten themes:

2- Jobs and continued development within the planetary boundaries;

8- Conservation of biodiversity and ecosystems, including freshwater sources;

This proposed list further motivated delegates as it ignited the process of transiting from intentional mapping to crafting a list of goals.

The majority of speakers suggested that “Energy Access” should be included as a goal in the new development agenda. Indeed, as most current development goals (health, education, water), it is perceived as an “enabler of development”.  Kandeh Yumkella, Special Representative of the Secretary-General on Sustainable Energy for All, endorsed this dynamism and delivered a plea on integrating “Energy Access for All” as an SDG.

Furthermore, the delegates insisted that the energy-related goals should be evidence-based and coupled with targets and measurable indicators. Renewable energy and the use of solar and wind resources, especially in remote and rural areas, were also emphasized. Last but not least, many countries – especially small islands- expressed their concerns about challenges of climate change that represent a survival issue, and asked for special consideration for oceans.

This open working Group session represented a key moment in the process of setting the new development agenda. Not only did it capture the interactive and inclusive dialogue between multi-stakeholder, taking place over the last months, but it did also incarnate a move towards drafting a concrete list.

This constructive forum was particularly interesting as representatives could share their ideas but also frame their specificities and particular geographic and developmental needs within a global framework. Even if a large consensus was built on the common challenges of a sustainable and inclusive development, the differences in levelof development and priorities stressed the need for flexibility in instruments and strategies of implementation.

In fact, the sixth session, currently taking place from 9-13 December 2013, builds on the progress made during the 5th Open Working Group session and aims at framing the means of implementation and the global partnership required for achieving sustainable development; while also highlighting the needs of countries in special situations – African countries, LDCs, land-locked developing countries, and SIDS, and specific challenges facing middle-income countries.