CAIRO - A regional cold snap spread to Egypt on Friday, with some Cairo suburbs seeing snowfall for the first time in years, a weather official said. 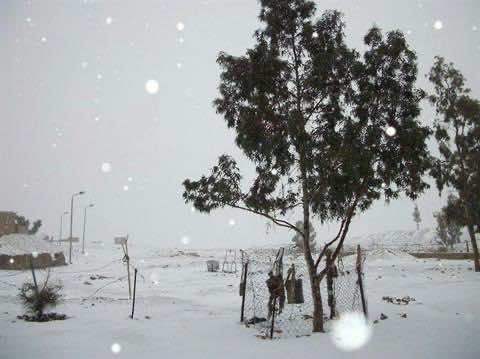 CAIRO – A regional cold snap spread to Egypt on Friday, with some Cairo suburbs seeing snowfall for the first time in years, a weather official said.

The Middle East has been hit by a fierce winter storm, with temperatures in Egypt plummeting over the past two days as torrential rain also lashed parts of the country.

“It is the first time in very many years” that it has snowed in the suburbs of Cairo, said Ali Abdelazim, an official at the meteorological centre.

“The whole garden was white,” Karim Kheirat told AFP by telephone from the new town of Medinati northeast of the capital.

“It’s the first time in my life that I have seen it like this.”

In the Sinai Peninsula, the storm deposited a blanket of snow several centimetres (inches) thick in the mountainous area around Saint Catherine’s monastery for the first time in decades.

Mokhtar Hussein, who lives in the area, said he had not left his house since Thursday because of the weather.

“We aren’t leaving the house at all because the whole town is covered in snow,” he said.

On the Mediterranean coast, gardens, streets and houses in the town of Ras al-Bar were covered by a layer of white after heavy snow, resident Rania al-Mubashir said.

The northern coastal city of Alexandria only received light snowfall, but authorities shut the port for the third consecutive day because of the bad weather and strong winds.