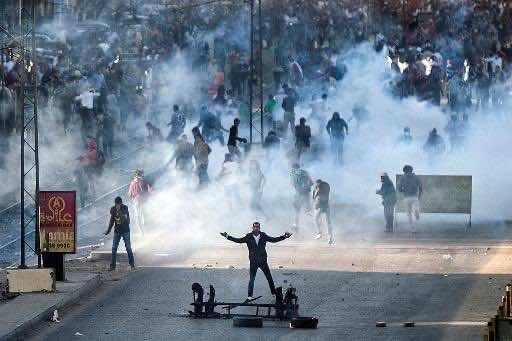 They said protesters torched a police car in the canal city of Suez and another police car was destroyed at Qena in the south.

Tear gas grenades were used against Islamists in several Cairo districts after protesters took to the streets for weekly pro-Morsi demonstrations.

The protests went ahead despite the country being gripped by icy winter weather.

Protesters lobbed petrol bombs at the police in the capital, the security officials said.

Such demonstrations are regarded as illegal, since they do not conform to a new law requiring organisers to give three days’ notice of a protest.

In Fayoum south of Cairo two policemen were wounded by buckshot at a protest, the sources said.

Police also intervened in the Nile Delta city of Mahalla police to break up clashes between pro- and anti-Morsi supporters.

Since Egypt’s first democratically elected president was ousted after just a year in office, authorities installed by the army have cracked down hard on his supporters.

More than 1,000 people, most of them pro-Morsi, have been killed and thousands of Islamists have been arrested since the crackdown began in mid-August.