TUNIS - Tunisia's political parties were holding final talks Saturday to choose an interim premier to end the country's political crisis, said the powerful UGTT union, which has been acting as mediator. 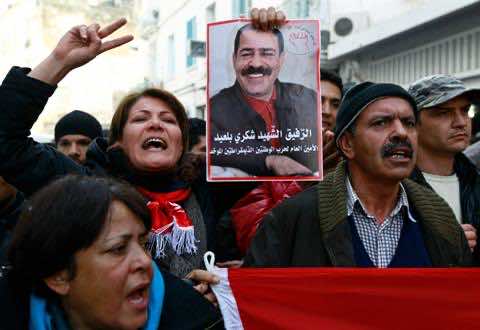 TUNIS – Tunisia’s political parties were holding final talks Saturday to choose an interim premier to end the country’s political crisis, said the powerful UGTT union, which has been acting as mediator.

The negotiations come a day after a candidate agreed on by the Islamist-led government and the mostly secular opposition, 92-year-old Mustapha Filali, ruled himself out due to his age.

Mediators in the crisis, which was sparked by the assassination of opposition MP Mohammed Brahmi by suspected jihadists in July, had originally given parties until 1100 GMT Saturday to make another choice, threatening to announce the talks’ failure.

But the UGTT said on Facebook that the press conference at which the new candidate was to be announced has been pushed back until an unspecified time.

The announcement was postponed because representatives from the nearly 20 parties at the talks arrived late, a journalist told AFP.

Brahmi’s murder triggered calls for the resignation of the coalition government led by moderate Islamists Ennahda.

Under a roadmap brokered by mediators in October, Ennahda and the opposition pledged to negotiate an interim government of independents.

An independent, interim prime minister should have been agreed on by early November, but the deadline has been pushed back repeatedly since then.

On Thursday, Ennahda and the main opposition parties agreed on Filali, who had served as agriculture minister under Tunisia’s founding president Habib Bourguiba.