DOUALA- The French government stands accused of trying to control the narrative on the Central Africa Republic (CAR), like it did in Mali earlier this year, by restricting flights into Bangui, the capital of CAR, and thereby denying many journalists and activists first-hand information. 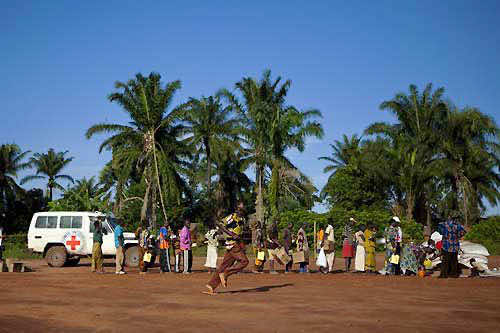 DOUALA- The French government stands accused of trying to control the narrative on the Central Africa Republic (CAR), like it did in Mali earlier this year, by restricting flights into Bangui, the capital of CAR, and thereby denying many journalists and activists first-hand information.

“I am supposed to be in Bangui covering the conflict but now am stranded here in Cameroon,” one furious Swedish journalist told Anadolu Agency on Saturday, asking not to be named.

On 7 December, French troops closed the airport in Bangui, the capital city of CAR, paralyzing flights of several airlines plying the route.

“We were ordered to cancel our flights to Bangui until the situation normalizes,” an official of Air Angola told AA at Douala airport.

He said they used to fly to Bangui throughout the period of the conflict but were surprised when the airport was recently closed.

CAR, a landlocked country, descended into anarchy in March, when Seleka rebels from the mostly-Muslim north ousted president François Bozize.

A Christian who had held the office for ten years, Bozize enjoys the support of the country’s Christian majority.

The months since have seen the emergence of Christian “anti-balaka” militias, which have engaged in frequent clashes with Seleka fighters.

Scores of passengers travelling to Bangui through Douala airport in neighboring Cameroon have been stranded for nearly ten days.

Many of them are international journalists who were travelling to Bangui to cover the raging conflict in CAR.

Airlines continue to give passengers new travel dates, only to be cancelled at the last moment.

“The only option is for us to plead with the UN and travel on their plane,” said another western journalist.

Some reports suggested that Air France has been flying from Paris to Bangui without restrictions.

The claim would not be independently verified by AA.

Efforts to get a comment from the French military about closing Bangui airport was futile as a spokesman in Bangui referred AA to Colonel Gilles Jaron, spokesman for the French army joint staff in Paris whose phone went unanswered.

Woungli Jean-Pierre, a social-political activist who advocates for pan-Africanism, claimed the French had used a similar strategy when they intervened militarily in Mali, another former French colony.

“Why are they restricting flights into the country? He told AA.

“Are they afraid that journalists will go in and tell us the truth?”

In January 2012, militant Islamist groups mounted an offensive against the Malian government for the independence of the north.

In March, mutinous soldiers staged a coup against President Amadou Toumani Touré allegedly for his failure to defeat the rebels in the north.

However, by early April the rebels had seized the three largest northern cities in the north and declared the independence of Azawad.

A month later, Malian and French forces recaptured most of the north.

At the time, many local and international journalists had to defend on press releases issued by French and Malian authorities.

Despite repeated appeals, none of them was allowed access to the frontlines or the possibility of directly observing events as they unfold.

Many groups, including the Paris-based Reporters Without Borders, accused France of seeking to control information and shape public perceptions about the conflict.

“The French authorities, supported by their Malian counterparts, have achieved their ‘zero image of the war front’ media objective for Operation Serval by strictly controlling access to information,” the group’s secretary-general Christophe Deloire said in February.

At a later stage, French military authorities allowed only reporters with the French media to be embedded with their troops.