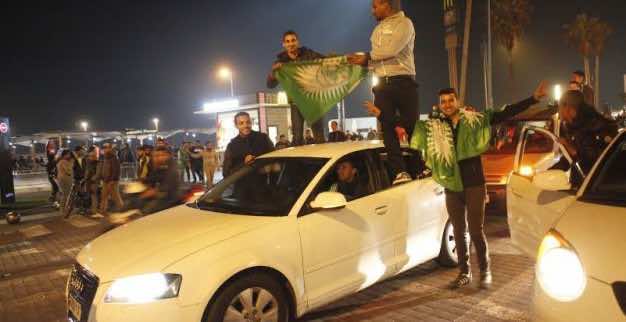 Fez- After several years full of disappointing performance by Morocco’s national team and its early elimination from the 2014 FIFA World Cup, which will take place in Brazil next summer, Raja of Casablanca was finally able to put a smile on Moroccan fans after its historic win over Monterrey on Saturday night in Agadir.

Casablanca’s streets are witnessing an exceptional moment after the city’s team Raja of Casablanca made it to the semi-finals of the FIFA Club World Cup following its win over the Mexican team.

Although Moroccans fans across the country were hopeful their team would deliver a good performance and qualify to the semi-finals, many were not sure Raja players could face up to the experience of Monterrey, a team that has played in the two previous edition of the FIFA Cub World Cup and is the current holder of the CONCACAF champions league title.

The celebrations of this historic win started spontaneously in the most important areas of the city, especially in Ain Diab, and the Sraghna plaza where people were in frenzy chanting to the glory of their team.

The same atmosphere was witnessed in the streets of Layoune in the Sahara immediately after the game. People gathered in the most emblematic areas of the city to express their happiness to see a Moroccan team qualify to the semi-final of the FIFA Club World Cup.

“This celebration is a historic moment that unites all Moroccans from north to south, west to east and throughout the world. We are very proud of Raja’s performance and look forward to seeing the youth and talented people of our country achieve more,” Brahim one of Raja’s fans from Layoune told MWN.

For his part, Jamal Boubakri, a Moroccan living in Washington D.C, said:  “Today, Raja played well and made all of us proud as Moroccans. I wish them best of luck in the next round and hopefully win the cup.”

Raja will face Brazil’s Atletico Meneiro at Marrakech stadium next Wednesday, while Monterrey will meet Egypt’s Al Ahly for the fifth place earlier the same day.